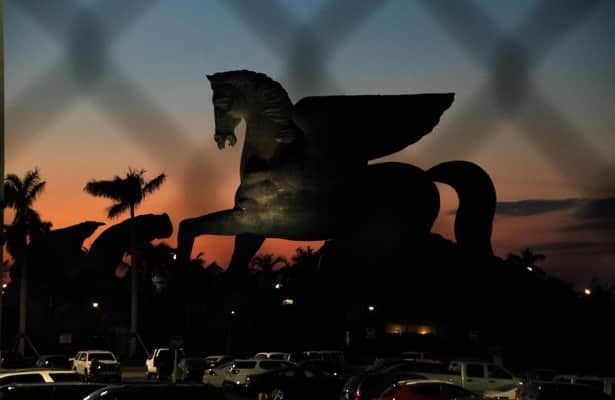 The infected horse was in now-quarantined barn 21, “which, as the crow flies, is a half a mile from where any of the ship-in horses will come in,” Benson told Horse Racing Nation on Tuesday.

The barn will be quarantined for at least 21 days.

“We have a full, I think it's an eight-foot fence around barn 21 with kind of a thick mesh screen,” Benson said. “There's one human entrance, it's security guarded, only necessary personnel to go in barn 21 can go in. Anyone who goes in has to walk through a foot bath on the way out with quaternary ammonium, which basically kills any virus, and they have to go directly home.

“If it's a vet who has to go in to see a horse and come out, they have to wear full biosecurity gear, including a Tyvek suit, double booties and gloves,” Benson continued. “We have twice-daily temperature logs that all the trainers are filling out. We have a once-a-day minimum – one of our vets walks through there in full Tyvek suits and biosecurity gear to check the health of the horses. The state vet will be coming in regularly to check the health of the horses in the barn.”

Benson said track officials have “done contact tracing on all horses that have been in that barn in the last 14 days and notified anyone who has a horse that has come out of that barn so that they can watch those horses.”

Benson confirmed a Daily Racing Form report that the one horse found to have been infected had been euthanized. She declined to identify the horse or its trainer.

"We have no other notifications of symptomatic horses so far," she said. "Fingers crossed that will be it."

Benson said horses shipping to the track will be stabled in a barn that “holds, I think, 36 to 40 horses, and we'll have a lot of space in between horses. So for example, all the horses that ship from California will be grouped together. The horses that ship in from Palm Meadows, we'll put space in between horses coming from different barns. Obviously all the horses from California will be transported together, so they're kind of in the same group. Horses that ship in from Fair Grounds or anyplace, else we will group them together so that there is enough separation, two to three stalls between each set of horses.”

Stabling at the ship-in barn will remain in effect for the duration of the quarantine period.