$1.1 million California Chrome sibling up for claim at Aqueduct 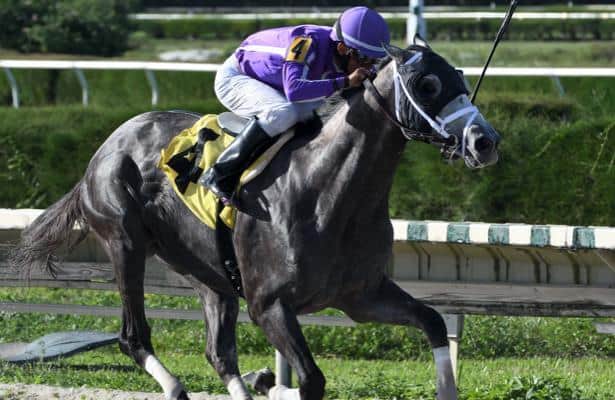 Fort McHenry, the $1.1 million half-brother of the popular champion California Chrome, has been gelded and will run Sunday for a $50,000 claiming price at Aqueduct racetrack.

By Tapit out of Love the Chase, Fort McHenry is entered for the tag in a one-mile optional claiming event that goes as the third race at 2:25 p.m. ET. Trainer Todd Pletcher confirmed the “first-time gelding” designation for Fort McHenry on the Aqueduct overnight but declined further comment. Fort McHenry was purchased at the 2018 Keeneland September yearling sale by M.V. Magnier and is campaigned by the longstanding Coolmore-connected partnership group of Michael Tabor, Mrs. John Magnier and Derrick Smith. He was fifth on debut at Saratoga last August and earned his diploma Nov. 2 in his third start at Gulfstream Park West. Fort McHenry was then sent most recently to stakes company for Gulfstream Park's Nov. 30 Smooth Air, a one-mile event before which Pletcher called him “an exciting colt” who was “starting to put things together.” That optimism didn’t transfer to race day, however. Fort McHenry was in the second flight for the opening half mile of the Smooth Air, he chased around the turn and then faded down the stretch to finish ninth of 10 beaten some 25 lengths. Fort McHenry returned to the work tab 15 days later at Palm Beach Downs. He has since followed with four additional breezes while in south Florida with the most recent being a four-furlong drill Saturday in :47.87. Fort McHenry is the fifth foal out of Love the Chase. Her first, Perry Martin and Steve Coburn’s California Chrome, earned $14,752,650 on the racetrack on his way to Horse of the Year designations in 2014 and 2016. A winner of 16 of 27 starts with six Grade 1 scores, California Chrome's first progeny will hit the racetrack this spring in the U.S., while the stallion himself recently relocated to Japan. Love the Chase’s other progeny includes a full brother to California Chrome. Faversham, a 5-year-old, has won 2 of 17 starts and is still active on the midwest circuit. Hope’s Love, a filly born in 2013, was winless in five starts, and R Sunday Surprise, another filly from the 2014 crop, won once from nine starts in 2016 and 2017. In 2016, Love the Chase was sold while in foal to the colt that would become Fort McHenry for $1.95 million to John McCormack Bloodstock at the Fasig-Tipton Kentucky fall mixed sale. She was offered at the same auction two years later by Bedouini Bloodstock, agent, but failed to reach her reserve price with a final bid of $1.3 million. Love the Chase was reportedly bred to first-year sire Accelerate in 2019.

Playing the horses can be a rewarding but tough game. Exacta, trifectas, superfectas, Pick 4s, Pick 5s -- there are so many wagers to play, it can get overly confusing.