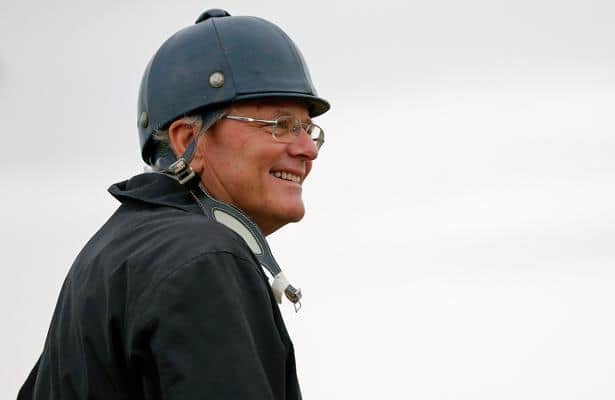 Photo: Eclipse Sportswire
Louisville, Ky.
Obligatory, who went off as a 16-1 long shot, ran down favored Dayoutoftheoffice to win the Grade 2, $300,000 Eight Belles Stakes on Friday at Churchill Downs. She earned her first stakes victory with the effort.

Trained by Bill Mott, the Curlin filly came into the race off a fourth-place finish going two turns in the Fair Grounds Oaks (G2).

"There was going to be a lot of speed on the rail on paper," jockey Jose Ortiz said. "I was just going to sit on her and give it one good move."

It was Euphoric, running for trainer Bernard Flint, who took the early lead in the seven-furlong race, battling with Windmill and Dayoutoftheoffice and knocking out swift early fractions of 21.89, 44.46 and 1:09.16. Euphoric carried the lead into the final turn.

Coming out of the turn, Dayoutoftheoffice, second-place finisher last out in the 2020 Breeders’ Cup Juvenile Fillies, took the lead over and appeared prepared to expand on it down the stretch.

Obligatory had other plans, running from the outside to capture the narrow victory by a head at the wire. Dayoutoftheoffice finished in second and Make Mischief completed the trifecta.

Well they went hard early and it set it up perfectly for a swooper like Obligatory, who swamped the favorite Dayoutoftheoffice late to score in the G2 Eight Belles under @jose93_ortiz at 16-1!#TwinSpiresReplay pic.twitter.com/JZ90qb9ts8

Obligatory returned $35 for the win.

After the race, Mott pointed to the Acorn (G1) at Belmont Park on June 5 as the filly's possible next race.
"I believe she'll get a mile," Mott said. "She broke her maiden at a mile."
Obligatory Churchill Downs Eight Belles Eight Belles (2021)