15 graded-stakes races to sink your teeth into this weekend 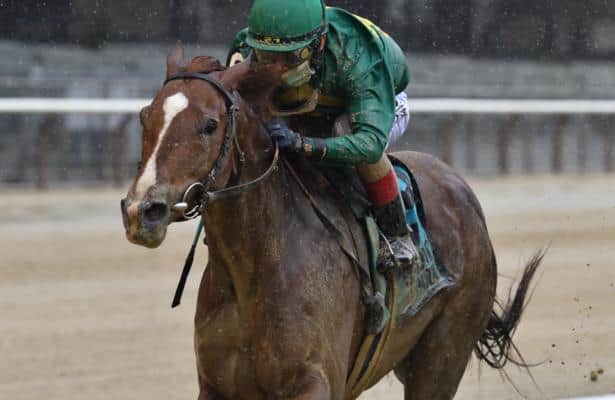 The long Thanksgiving weekend is shaping up as a different experience for most of us this year. No matter how your plans are affected by the pandemic, you can sink your teeth into these 15 graded stakes on tap in the U.S., led by two races at Churchill Downs.

Click on the links in the headings to see the entries/probables for each race.

The overflow field of 15 is headlined by 2019 Travers (G1) winner and Kentucky Derby runner-up Code of Honor along with other multiple graded-stakes winners By My Standards, Owendale and Mr Freeze.

Code of Honor, trained by Shug McGaughey, finished second to Complexity last out in the Kelso Handicap (G2).

Racing analyst Brian Zipse suggests you direct your attention to Aurelius Maximus, who has had a stop-and-start career that has yet to produce a stakes win. Click here to read what he sees in the son of Pioneerof The Nile.

Ahead of Wednesday's draw, HRN has five juveniles listed as probables for this 2021 Kentucky Derby points prep.

They include Swill and Inspector Frost, both coming off of maiden wins for trainer Brad Cox. Super Stock is expected to run for Steve Asmussen. He graduated in August on third try and his been in the money, though winless, in three starts since.

Others listed as probables are Arabian Prince for Dallas Stewart and King Fury for Kenny McPeek.

Here are the other stakes scheduled for the Thanksgiving weekend:

Falls City Handicap (G2), Churchill Downs, 1 1/8 miles, fillies and mares 3yo and up

Cox has the 8-5 morning-line favorite in Bonny South, who came in second in her last two outs, beaten by Miss Marissa in the the Black-Eyed Susan (G2) and Swiss Skydiver in the Alabama (G1). The second choice, at 5-2, is McPeek's Envoutante, winner of the Remington Park Oaks last out. Chad Brown brings Smooth With a Kick (5-1) to her first graded stakes off a win in an allowance race at Keeneland in October.

Brown's Orglandes is the 5-2 morning-line favorite for Del Mar's Thanksgiving Day feature. After racing in France she had a year off and began a U.S. campaign in September with a third-place allowance finish at Monmouth Park followed by an allowance win at Belmont Park in October. Blame Debbie (3-1), last seen at Keeneland winning the Dowager (G3) for Graham Motion, is the early second choice followed by Never Be Enough (4-1), winner of the Kathryn Crosby at Del Mar last out.

Oscar Dominguez looks to defend this event after upsetting Uni last year with John Velazquez aboard. This year Irad Ortiz Jr. has the mount for trainer Richard Baltas. Two entrants made their last appearance in the Breeders' Cup Turf: Arklow, who finished sixth for Brad Cox, and Acclimate, who came in ninth for Philip D'Amato. D'Amato also entered Say the Word, winner of the Northern Dancer Turf (G1) at Woodbine last out in October.

Belmont Derby (G1) winner Gufo looks for another win for trainer Christophe Clement. The Declaration of War colt has finished in the money in all of his seven starts, winning five. Clement also entered Decorated Invader, who looks to return to form after three straight stakes wins to start the year. In his last two races he was fifth in the Saratoga Derby Invitational in August and second in the Hill Prince Stakes (G2) at Belmont in October. Storm the Court, sixth in the Kentucky Derby last out, will continue to pursue his first win this year. Trained by Peter Eurton, his last score was in the Breeders' Cup Juvenile last year.

Ahead of Wednesday's draw, HRN's probables for this race include Simply Ravishing, who steps down in class after a fourth-place finish in the Breeders' Cup Juvenile Fillies. Before that she was 3-for-3, including a score in the Alcibiades Stakes (G1) at Keeneland in October. Cox is expected to enter Coach, undefeated in three starts including in the Rags to Riches at this track and distance last out in October, and Travel Column, who came in third to Simply Ravishing in the Alcibiades (G1) after graduating at Churchill on first try in September.

Anothertwistafate looks to build on his score in the Longacres Mile (G3) last out. He was 10th in the Preakness Stakes but otherwise has finished first or second in six starts since graduating in December 2018. Baltas's One Bad Boy and Neil Drysdale's Majestic Eagle come in after their one-two finish in the Lure at Santa Anita on Oct. 25. Baltas won this last year with Next Shares, who will look to defend after not winning in six starts since.

Probables for this race include Oklahoma Derby and Indiana Derby winer Shared Sense for trainer Cox. Dale Romans is expected to start Attachment Rate, who bounced back from a 14th-place finish in the Kentucky Derby with a score in an allowance race at Churchill Downs on Oct. 29. Also expected is Money Moves, 13th in the Kentucky Derby for Pletcher before winning an allowance race at Belmont last out.

Motion's Invincible Gal will look to improve upon her 11th-place finish in the Breeders' Cup Juvenile Fillies Turf. Richard Mandella brings Pizzazz to this race. The War Front filly broke her maiden at this track and distance on Nov. 1. Brown's Fluffy Socks will be making her fifth start on as many different tracks. She came in second in the Chelsey Flower at Belmont last out after winning the Selima at Pimlico in October.

Michael Dickinson is expected to start Theodora B., fifth in the E. P. Taylor Stakes (G1) last out but winner of the TVG Stakes and the Dance Smartly (G2) in her two races before that. Clement has two probables: Wegetsdamunnys, who has not won in four tries since scoring in an allowance race at Belmont in June after a six-month layoff, and Mutamakina, who had raced only in France before finishing third in the Zagora Stakes at Belmont on Oct. 31. Two others from the Zagora also are probable: Todd Pletcher's Cap de Creus, who finished fifth, and Tom Albertrani's Beau Belle, who finished eighth.

Among the probables for this $300,000 race is Sharing, who bounced back from a second-place finish in the Coronation Stakes (G1) at Ascot with a score in the Edgewood (G2) at Churchill Downs on the Kentucky Oaks undercard. Before the Coronation, the Speightstown filly had won four straight since graduating, including the 2019 Breeders' Cup Juvenile Fillies Turf. Newspaperofrecord looks to return to form after finishing third in the First Lady in October and second in the Churchill Distaff Turf Stakes in September. Before that the Brown-trained filly won the Intercontinental (G3) and the Just a Game (G1), both in June, after an 11-month layoff. Mandella's Jolie Olimipica has finished first or second in four stakes races this year after moving to the U.S. from Brazil. Cox could start Juliet Foxtrot, winner of the Gallorette Stakes (G3) last out at Pimlico.

HRN has only two probables for this race. Big Fish is a Mr Big colt with a record of 5:2-1-1 after graduating at this track and distance in August for trainer David Hofmans. Caisson, a son of War Front, broke his maiden in a one-mile race at Del Mar in August, followed by a fourth-place finish in the Zuma Beach last out in October.

Fall Highweight (G3), Aqueduct, 6 furlongs, 3yo and up

Among the probables is Majestic Dunhill, with George Weaver looking for back-to-back wins after the 5-year-old's score in the Bold Ruler (G3) last out in October. Before that he had not had a win in 10 starts since November 2018. Another probable seeking a second straight win is Tribecca. Chris Englehart's 6-year-old won the Hudson Handicap in October and has two allowance wins earlier in the year.