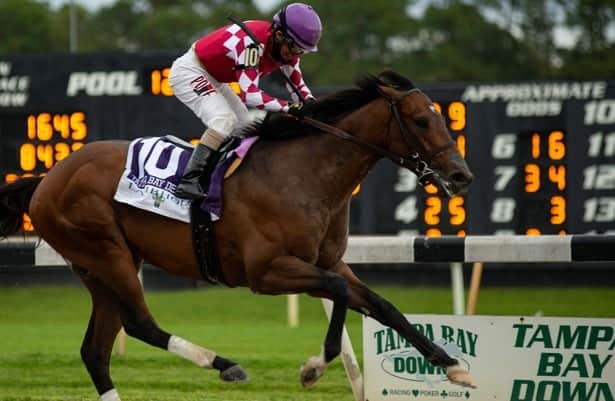 Helium had not started for 4½ months leading into Saturday’s Grade 2, $400,000 Tampa Bay Derby, and had never raced on any surface but the synthetic of Woodbine.

Now the Mark Casse-trained colt has effectively clinched a spot in the 2021 Kentucky Derby starting gates.

Helium pounced in the far turn of Tampa Bay Downs’ premier event, then dug in gamely under jockey Jose Ferrer to hold off late runner Hidden Stash by ¾ of a length.

With the Tampa Bay Derby victory, Helium earned 50 points toward entry into the 2021 Kentucky Derby. Fifty points has been enough to make the Derby field each May since Churchill Downs instituted the points system in 2013.

Making both his graded-stakes and dirt debut, Helium broke from post No. 10 on Saturday in the 12-horse Tampa Bay Derby, going off as a 15-1 shot. Boca Boy, fourth-place finisher last month at Tampa in the Sam F. Davis Stakes (G3) led the field through fractions of 23.23 and 47.06 while Helium sat four-wide and mid-pack.

Continuing on his wide trip, Helium moved up on the far turn under Ferrer. He put his nose in front of Boca Boy midway through that turn and assumed the lead.

Davis third-place finisher Hidden Stash followed Helium’s path and came up to challenge him into the stretch. Those two dueled to the wire, with Helium prevailing.

"Mark Casse gave me a great opportunity to go out there and do my job and do my thing," Ferrer said. "On the backside, I had all kind of horse under me, and I could see who had more horse and when I set him down at the 3/8 pole, I could see I had a chance. I just had so much horse and he flew down the lane.

"Then I think he got by himself and kind of got bored and he thought, 'Game over.' But I still had plenty of horse and he re-broke again.”

Helium won on debut last September at Woodbine, then took the Display Stakes over that surface a month later. He has worked since February over the dirt at Palm Meadows Training Center leading up to his 2021 bow.

Casse is aiming this year for his first Kentucky Derby triumph. The Hall of Fame conditioner won the Triple Crown's other two legs in 2019 with War of Will (Preakness Stakes) and Sir Winston (Belmont Stakes).

The Gotham Stakes (G3) going one mile Saturday at Aqueduct was also under consideration for Helium's Kentucky Derby trail debut, Casse said, but the team chose to run instead at Tampa Bay Downs.

"This horse is something because he got away a little slow today and we had planned on him being closer," Casse said. "He made that big wide run, he made the lead but (after Hidden Stash rallied) I was going to be happy with second. I thought, 'We can build on this, because this is only his third start and there is a lot of room for improvement.'

"What was amazing is that he wasn’t overly exhausted after the race. He’s a beautiful horse, he’s bred to run all day long and he looks like a Derby horse, so it’s exciting.”