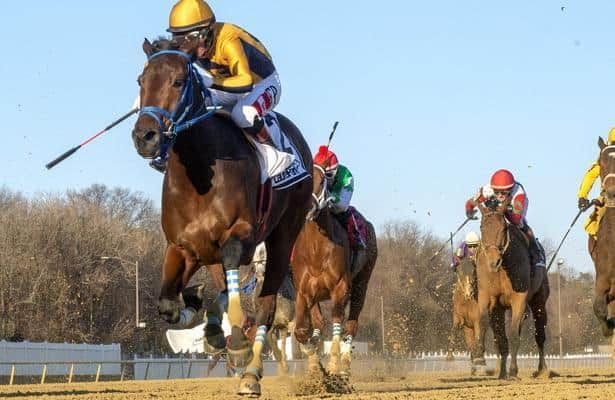 A field of 11 distaff sprinters will head to the post Monday for this year's edition of the 6 1/2-furlong Masters, run over the synthetic track in Pennsylvania, led by likely morning line favorite Late Night Pow Wow and defending champion Hotshot Anna. Graded stakes winner Talk Veuve to Me is also in the field.

Breeze Easy LLC's Late Night Pow Wow is a Grade 3 winner who sports an immaculate record of 12 wins from 14 starts with one second and one third. Trained by Javier Contreras, the West Virginia-bred daughter of Fiber Sonde checked in a respectable third when trying Grade 1 company for the first-time in Keeneland's Madison Stakes in April, then returned from a freshening to regain her winning form in the Twixt Stakes at Laurel Park on July 14.

Late Night Pow Wow will break from post No. 3 under jockey Fredy Peltroche.

Hotshot Anna earned her second graded stakes win in last year's Masters for owner-trainer Hugh Robertson, but she was sidelined for the the remainder of the year following that race. The 5-year-old daughter of Trappe Shot resurfaced in June to run second in the Chicago Handicap (G2) before reeling off consecutive victories that include the Aug. 19 Satin and Lace, the local prep for the Masters.

Hotshot Anna will break from post No. 10 with Antonio Gallardo in the irons.

Talk Veuve to Me is a Grade 3 winner exiting an allowance win at Saratoga for trainer Rodolphe Brisset, who is also a part-owner of the filly with Team Valor and Stephen McKay. The 4-year-old daughter of Violence is Grade 1-placed with her biggest win coming in last year's Indiana Oaks (G3).

Talk Veuve to Me will break from post No. 9 with Jose Ortiz up.