Retired in 2012, But Not Forgotten
The New Year, a time for new beginnings, is fast a... 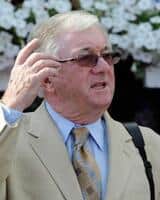 Toner reflects on Winter Memories
Trainer Jimmy Toner was a mix of stoic and sentime...