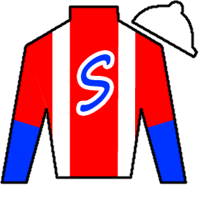 Swift Temper is a 18 year old mare that was born in 2005 and retired -> race from 2007 to 2009. She was sired by Giant's Causeway out of the Seeking the Gold mare Glasgow's Gold. She was trained by Dale L. Romans and retired -> race for Mark H. Stanley, and was bred in Kentucky, United States by Omar Trevino, Richard Nip. Swift Temper has raced at Belmont Park, Churchill Downs, Delaware Park, Gulfstream Park, Hawthorne Racecourse, Saratoga with wins at Belmont Park, Delaware Park, Hawthorne Racecourse. Her stakes wins include wins in the 2009 Ruffian (G1), 2009 Delaware Handicap (G2), and the 2009 Sixty Sails Hcp (G2).

At Long Last, the Delaware Handicap is Grade One
After years of being snubbed, after years of being...
Serenading best in Falls City
You might say there were a few no-shows Thursday a...
Churchill: Swift Temper out of Falls City
Swift Temper was scratched this morning from the T...
Racing fans give thanks with graded stakes
Thanksgiving is not only a time for families to ga...
Tuesday card kicks off busy week at Churchill
Churchill Downs' final week concludes with the tra...