Rattlesnake Bridge is a 15 year old horse that was born in 2008 and retired -> race from 2011 to 2013. He was sired by Tapit out of the Cherokee Run mare Prall Street. He was trained by Kiaran P. McLaughlin and retired -> race for Mill House, LLC, and was bred in Kentucky, United States by Dennis Lynch, William Graves. Rattlesnake Bridge has raced at Aqueduct, Belmont Park, Churchill Downs, Gulfstream Park, Monmouth Park, Penn National, Parx Racing, Saratoga with wins at Gulfstream Park, Monmouth Park. His has a stakes win at the 2011 Long Branch (LS).

Flat Out Back at Big Sandy for Westchester
In three starts at Belmont Park, Flat Out has won... 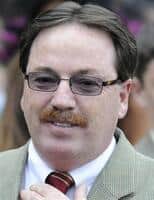 Drosselmeyer Takes Off in Breeders' Cup Classic
Drosselmeyer and Mike Smith came from the clouds t...