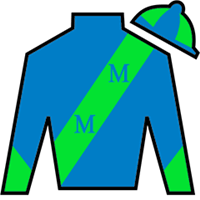 Native Ruler is a 19 year old horse and has raced from 2009 to 2011. He was sired by Elusive Quality out of the Dixieland Band mare Tajannub. He was trained by Chris Richard and has raced for Maggi Moss, and was bred in Kentucky, United States by Rick Nichols, Bernie Sams. Native Ruler has raced at Churchill Downs, Ellis Park, Oaklawn Park, Prairie Meadows with wins at Churchill Downs, Ellis Park, Oaklawn Park. His stakes wins include wins in the 2011 Don Bernhardt, 2011 King Cotton (LS), and the 2010 Don Bernhardt (LS).