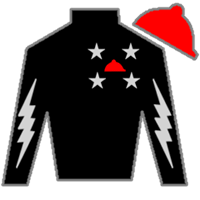 Major Gain is a 15 year old horse that was born in 2008 and retired -> race from 2010 to 2015. He was sired by More Than Ready out of the Old Trieste mare Dream Lady. He was trained by Louie J. Roussel III and retired -> race for Louie J. Roussel III, and was bred in Kentucky, United States by Gary West, Mary West. Major Gain has raced at Arlington Park, Canterbury Park, Churchill Downs, Fair Grounds Race Course, Gulfstream Park, Hawthorne Racecourse, Keeneland, Saratoga with wins at Arlington Park, Fair Grounds Race Course. His has a stakes win at the 2010 Arlington-Washington Futurity (G3).

Dialed In Storms Home in Holy Bull
Dialed In, more than fifteen lengths back in the e...