Junebugred is a 13 year old gelding that was born in 2009 and unknown -> race from 2011 to 2014. He was sired by Corinthian out of the Dixieland Band mare Dixie Melody. He was trained by Leslye G. Bouchard and unknown -> race for Leslye G. Bouchard, and was bred in Kentucky, United States by [Add Data]. Junebugred has raced at Aqueduct, Arlington Park, Churchill Downs, Hoosier Park, Laurel Park, Monmouth Park, Oaklawn Park, Parx Racing, Saratoga with wins at Aqueduct, Oaklawn Park. His has a stakes win at the 2012 Smarty Jones (LS). 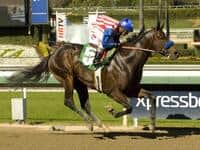 Oaklawn Park: Hobby Horses Head East
Calling it the most successful season at Oaklawn i...
KENTUCKY DERBY 2012 Contenders – Hansen is back; Out of Bounds injured
The road to Kentucky Derby 2012 is full of ups and...