Inherit the Gold is a 16 year old gelding that was born in 2006 and unknown -> race from 2009 to 2012. He was sired by Gold Token out of the Personal Flag mare Melissa's Sunshine. He was trained by James Hooper and unknown -> race for Susanne Hooper Glas-Tipp Stable LLC, and was bred in New York, United States by Susanne Hooper. Inherit the Gold has raced and won at Aqueduct, Belmont Park, Charles Town, Saratoga. His stakes wins include wins in the 2012 Action Stakes (LS), 2012 Haynesfield (RS), 2011 New York Stallion Thunder Rumble (RS), 2011 Excelsior (G3), 2011 Kings Point Stakes (RS), and the 2011 Mr. International (RS). 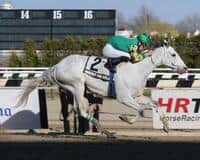 Inherit The Gold Wins Haynesfield
Inherit the Gold made his eighth appearance in the...
Spa City Fever Pays $71 in Alex Robb
Making the most of his final opportunity to win a...
Icabad Crane just keeps rolling along
Looking for a horse that is in it for the long hau...