Indian Winter is a 15 year old horse and has raced from 2010 to 2013. He was sired by Indian Charlie out of the Dixieland Band mare Backroom Blues. He was trained by Jerry Hollendorfer and has raced for John Carver, Peter Abruzzo, George Todaro , Jerry Hollendorfer, and was bred in [Add Data] by [Add Data]. Indian Winter has raced at Churchill Downs, Del Mar, Golden Gate Fields, Hollywood Park, Santa Anita Park, Turf Paradise with wins at Del Mar, Hollywood Park, Santa Anita Park. His has a stakes win at the 2011 San Pedro Stakes (LS).

Can Anyone Catch Tapizar in Strub Stakes?
The ease of his 3 ½-length victory in the Grade II... 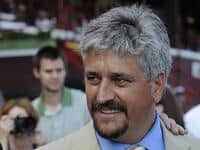 Asmussen Has Three Malibu Starters
Steve Asmussen , who is wintering for the second c...