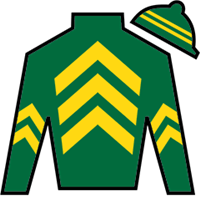 Honor Code is a 11 year old horse that was born in 2011 and retired -> race from 2013 to 2015. He was sired by A. P. Indy out of the Storm Cat mare Serena's Cat. He was trained by Claude R. McGaughey III and retired -> race for Lane's End Racing, Dell Ridge Farm LLC, and was bred in Kentucky, United States by [Add Data]. Honor Code has raced at Aqueduct, Belmont Park, Churchill Downs, Gulfstream Park, Keeneland, Saratoga with wins at Aqueduct, Belmont Park, Gulfstream Park, Saratoga. His stakes wins include wins in the 2015 Whitney (G1), 2015 Metropolitan (G1), 2015 Gulfstream Park Handicap (G2), and the 2013 Remsen (G2).

Flashback: Honor Code wins a peculiar Remsen
It’s safe to say that Honor Code has been one of t...

Honor A.P. has some catching up to do on Kentucky Derby trail
From the moment Honor A. P. flew past horses to go...

Zipse: Honor A. P. races in tradition of Seattle Slew, A.P. Indy
It’s far from commonplace, but every so often grea...

Saratoga 2016: Graded Stakes Preview
With Songbird  and Nyquist as headliners at the 20...