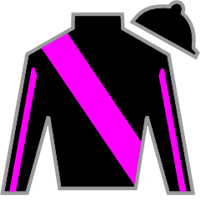 First Samurai is a 19 year old horse that was born in 2003 and retired -> race from 2005 to 2006. He was sired by Giant's Causeway out of the Dixieland Band mare Freddie Frisson. He was trained by Frank L. Brothers and retired -> race for Lansdon B. Robbins III, Bruce Lunsford, and was bred in Kentucky, United States by John D. Gunther. First Samurai has raced at Belmont Park, Churchill Downs, Gulfstream Park, Keeneland, Saratoga with wins at Belmont Park, Churchill Downs, Gulfstream Park, Saratoga. His stakes wins include wins in the 2006 Fountain of Youth (G2), 2005 Champagne (G1), and the 2005 Hopeful (G1).

Justin Phillip Pounces in the Vanderbilt
While the two race favorites, Gentlemen’s Bet and...

Executiveprivilege - In Privileged Company
With her easy victories in the Landaluce and Sorre...
THE WEEKENDER PEDIGREE: LE MI GEAUX
We are still in the early furlongs of the freshman...