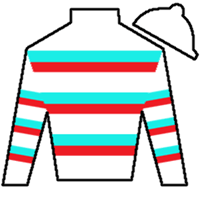 'So far so good,' with Dona Bruja on track for Arlington's Beverly D.
Trainer Ignacio Correas IV has had the Grade 1, $6...