Despite the Odds Photo Gallery

Despite the Odds is a 16 year old horse that was born in 2006 and retired -> race from 2009 to 2011. He was sired by Speightstown out of the Cozzene mare Lady Aloma. He was trained by Michael J. Trombetta and retired -> race for R. Larry Johnson, and was bred in Kentucky, United States by [Add Data]. Despite the Odds has raced at Belmont Park, Colonial Downs, Gulfstream Park, Hoosier Park, Keeneland, Laurel Park, Monmouth Park, Pimlico Race Course, Saratoga with wins at Belmont Park, Saratoga. His has a stakes win at the 2009 Hill Prince (G3). 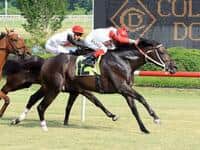 Baltimore Bob Hangs On in Da Hoss
After a thrilling duel through the stretch on the...
Full Field Set for Da Hoss
A competitive field of fourteen is set to go in th...
Indiana Derby attracts 15
Grade 2 winners MISREMEMBERED (Candy Ride [Arg]) a...
Sweet Victory
In addition to the 2-year old results detailed bel...