Dan and Sheila is a 13 year old horse and has raced from 2011 to 2014. He was sired by More Than Ready out of the Not For Love mare Sheila's Prospect. He was trained by David G. Donk and has raced for Funky Munky Stable, LLC, and was bred in Kentucky, United States by [Add Data]. Dan and Sheila has raced at Aqueduct, Belmont Park, Fair Grounds Race Course, Gulfstream Park, Monmouth Park, Saratoga with wins at Aqueduct, Gulfstream Park, Saratoga. 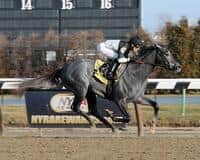 The Lumber Guy Back Quickly for Jerome
The Grade 2, $200,000 Jerome, the final graded sta...
Dan and Sheila Goes Next in Jerome
Zayat Stables’ Dan and Sheila , 11th behind Hansen... 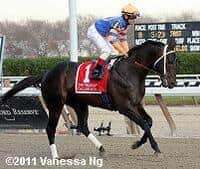 Calibrachoa Earns 111 BSF in Tom Fool
Calibrachoa was reported to be in good order Sunda...