2012 Breeders’ Cup Ladies’ Classic: An Early Program
With one month to go, I take a look at what the fi... 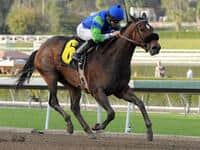 Zenyatta Stakes No Slam Dunk for Include Me Out
A winner of the Grade I Clement Hirsch at Del Mar...
Workers Out in Force at Santa Anita Park
More than 100 horses worked at Santa Anita on anot...

2012 Breeders’ Cup Ladies’ Classic: An Early Look
This will be the first of a series of articles cov...