All Due Respect Photo Gallery

All Due Respect is a 15 year old mare that was born in 2007 and retired -> race from 2009 to 2012. She was sired by Value Plus out of the Devil His Due mare Aunt Due. She was trained by Richard E. Dutrow, Jr. and retired -> race for Paul P. Pompa Jr. Taylor Brothers Properties LLC, and was bred in Florida, United States by [Add Data]. All Due Respect has raced at Aqueduct, Belmont Park, Churchill Downs, Delaware Park, Fair Grounds Race Course, Gulfstream Park, Hollywood Park, Oaklawn Park, Prairie Meadows, Santa Anita Park, Saratoga with wins at Fair Grounds Race Course, Gulfstream Park, Hollywood Park, Santa Anita Park. Her has a stakes win at the 2011 Ocala. 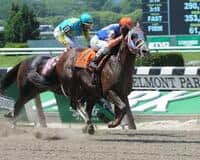 New Look Turbulent Descent Too Good in Ballerina
Returning to the scene of her most important caree...