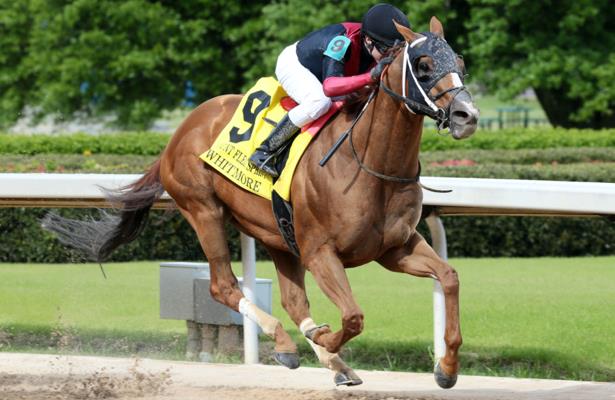 Kelso, Forego and John Henry all famously did it, but the list of American horses to win championships at the advanced age of 7 or older is a short one. In the first two decades of this century, only one division has crowned champions past the age of 6. Judging by what's been going on at our racetracks so far this year, that could change in 2020.

In my latest submission for the NTRA Top Thoroughbred Poll, I listed three horses in the top 10 which are 7 years old. I'm not positive, but I'd be willing to bet that it's the first time I included so many old timers on my ballot. I know it's early, and there are plenty of races to run in the next eight months, but clearly Tom's d'Etat, Whitmore, and Zulu Alpha have been terrific this season.

Of the trio, Zulu Alpha is probably the least surprising. The one division where horses of age have won Eclipse Awards in American racing in recent years is among the male turf horses. It also happens to be one of the weakest divisions we have. With last year's turf champ and Horse of the Year Bricks and Mortar off to stud in Japan, the division is wide open for the taking.

Zulu Alpha began his racing on the turf in Ireland and was once claimed for $80,000 during his American career. A developing top turf horse in 2019, the son of Street Cry got a jump on the competition this year with a rousing run up the rail to win the Pegasus World Cup Turf (G1).

A solid fourth behind Bricks and Mortar in last fall's Breeders' Cup Turf, Zulu Alpha has built upon his success to begin this year for trainer Mike Maker. He's run in a pair of Grade 2 races since the big win in the Pegasus Turf and has looked good in winning the Mac Diarmada and finishing an unlucky second in the Pan American.

If he is to join the likes of Miesque's Approval, Big Blue Kitten, and Flintshire, all of whom won an Eclipse Award as Outstanding Male Turf Horse at the age of 7, Zulu Alpha will need to continue his strong start away from Gulfstream Park. But at the moment, he is clearly the leader of the division.

Meanwhile, Tom's d'Etat has a much tougher task in front of him -- or maybe he doesn't. Older Dirt Male is certainly a deeper division than their grass counterparts, but on the other hand it is a division void of a clear standout. With the ongoing soap opera that is Maximum Security, caused by the alleged administration of an illegal substance by former trainer Jason Servis, it appears a division just waiting for someone to step up. Tom's d'Etat may be the horse.

One who can win from near the pace or from farther off the lead, he looked the part of a potential champion with powerful graded stakes victories to close out last season and then proved he has not lost a step with a stirring stretch run to win the recent Oaklawn Mile.

The victory, which meant running down the talented Improbable, was one of the performances of the year. With only one start so far in 2020, he remains a long way from a championship, but with a somewhat shortened season due to the global pandemic, the Breeders' Cup Classic might be even more crucial to a championship than ever.

This year, the Breeders' Cup will be held at Keeneland, and that could play right into the hands of the veteran runner. In his first start at the Lexington, Ky., oval, he stormed past his competition in the Fayette Stakes (G2) in impressive fashion. With the Classic likely to be a decider for the Eclipse Award, Tom's d'Etat would have to be considered as one of the early favorites, considering his fondness for Keeneland.

And then finally you have the fan favorite Whitmore. Once upon a time a much younger version of the son of Pleasantly Perfect ran in the 10 furlongs of the Kentucky Derby. It was his seventh career start, and he faded badly in that race. That edition won by Nyquist seems like a lifetime ago, and he has been sprinting ever since.

Unlike Tom's d'Etat, Whitmore has oodles of Breeders' Cup experience. Now 34 races into his career, he disappointed in his first attempt at America's most important sprint when he was jostled around early and finished a non-threatening eighth at Del Mar. Since then, though, the Ron Moquett-trainee has proven himself in the Breeders' Cup Sprint.

In 2018, he rallied home second in the race behind only the two-time champion Roy H. Last year he suffered his third defeat at the hands of the would-be champion Mitole but ran on well to finish third. The good news for Whitmore fans is that so far in 2020, he seems to be a more consistent horse than he was last year.

After rallying for second in his season debut, Whitmore has looked like a horse half his age. Two starts back he dazzled while winning his Hot Springs Stakes for a record fourth time. And on Saturday, while facing the best sprint field assembled so far this year, he made a decisive move that easily carried him to victory in the Count Fleet (G3).

Whitmore will need to win away from his favorite track, Oaklawn Park, to finally cement a championship. But with Mitole no longer running, he has firmly established himself as one of the sprinters to beat this year.

There's a long way to go before the 2020 Eclipse Awards are handed out, but so far, so good for the horses of experience. At the advanced age of 7, Tom's d'Etat, Whitmore and Zulu Alpha are all proving themselves to be among America's best. It's a rather comforting sight for this old writer, who has also seen plenty of water pass under the bridge.