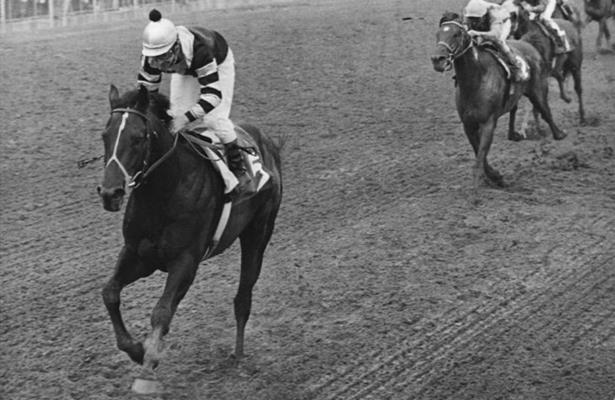 In the absence of a Kentucky Derby renewal this first Saturday in May, Horse Racing Nation writers are looking back at some of their favorite runnings throughout the week.

Seattle Slew was, and will always be, one of the greatest horses I’ve ever seen.

As for the Kentucky Derby, well, it is simply the race. The one race each year that everyone dreams of winning. From the months of anticipation, to all the spring time pageantry, and finally the exhilarating two minutes from gate to wire, there is nothing quite like the run for the roses.

So it’s no wonder that the 1977 edition of the Kentucky Derby, the one conquered by Seattle Slew, will forever be burned into my memory. I wasn’t there in person, but nonetheless the great horse managed to make it an unforgettable edition.

The first time I ever saw Seattle Slew was in the previous fall's Champagne Stakes. In those pre-Breeders’ Cup days, the Champagne was the most important race for a juvenile. Although only unveiled to a race day crowd four weeks earlier, the son of Bold Reasoning was the talk of the town.

Through his dazzling workouts, and the impression he had made in winning his maiden debut and then an allowance race, it was clear this horse had some serious talent. But full respect? No.

Once deemed not worthy to enter the Keeneland Summer Yearling Sale, Seattle Slew later went in the Fasig-Tipton auction for $17,500. Not quite peanuts, but a far cry from what you might think a future all-time great should command.

Big and gangly early, Seattle Slew had developed into a champion under the watchful eye of young trainer Billy Turner. A relative unknown at the time, Turner trained the horse for even more unknown owners in Mickey and Karen Taylor and Jim & Sally Hill.

His Champagne was a thing of beauty. He thoroughly dominated his nine rivals, including the horse thought to be his top competition, a Leroy Jolley-trained full brother of Honest Pleasure named For the Moment. The near-10-length victory was enough to secure Seattle Slew an Eclipse Award. Then easy wins in a Hialeah allowance, the Flamingo and Wood Memorial sent him to Louisville as undefeated champion.

Still, Seattle Slew was not without detractors. I remember the doubts that lingered going into that year’s Kentucky Derby. He only had six lifetime starts, and his relatively mediocre performance in winning his final prep at Aqueduct was a sign that he was ripe for the upset. His early speed and his pedigree would not translate well to the 10 furlongs of the Derby. But most of all, he was not Secretariat.

That big red machine that had run through the Triple Crown like no other horse before or since, cast a sizable shadow over the 1977 favorite from four years earlier.

Still, despite the questions, Seattle Slew was a clear favorite for the Derby. He was unbeaten, untested, and there simply wasn’t another horse in the race who struck fear in the hearts and the minds of the betting public. The Kentucky Derby, though, is rarely a walk in the park.

As a confirmed speed horse in a Kentucky Derby field of 15, it was vital that the 1-2 favorite got away from the gate well. In this one, he simply couldn't afford breaking poorly like he had done in his second career start. He was too good for his seven rivals in that seven-furlong allowance race of seven months earlier, but surely such a misstep in the 1 ¼-mile run for the roses would be the undoing of the undefeated colt. Yet a poor break is exactly what the champion got at Churchill Downs.

Banging into the gate at the starting bell, Seattle Slew came out sideways. He collided with the horse just to his right, and his rider Jean Cruguet struggled to stay up. Slew had lost all chance to get a comfortable run on the lead the first time past the Twin Spires. Instead, he was at the back of the field with little room to maneuver in front of him.

As For the Moment moved to the early lead, Seattle Slew was swallowed up in a sea of horse flesh, To this day, I'm still not sure how, but he weaved and plowed his way through the mess and suddenly was challenging his old Champagne rival for the front.

From there, Seattle Slew went on to hound his early challenger through fast fractions. The pair would run together into the stretch, and it was then when rider Cruguet asked Slew to exert his authority. The rest is Kentucky Derby history.

For me, everything which he accomplished during his racing career, and the list is a long one, can be connected back to his Derby victory over Run Dusty Run. Perhaps every bit as much about bravery, heart, and fortitude, as it was about physical talent, Seattle Slew will go down as one of the all-time greats, and it was all on display that afternoon at Churchill Downs.

Yes, I know older horses are supposed to defeat their young rivals, but for a point of reference, a 4-year-old Affirmed was all out to beat his younger rival, Spectacular Bid, in their only meeting. But as a 3-year-old versus the older Slew, he could offer little resistance to the greatness.

In the years since Seattle Slew, I’ve seen plenty of horses who were best of their crop but could not overcome the difficulties of the Kentucky Derby. Names like Risen Star, Point Given, Afleet Alex, Curlin, and Lookin at Lucky all come to mind. As good as they were, they could not get past the bad racing luck in such a big pressure cooker of a field.

That’s what I remember most about the 1977 Kentucky Derby.

Seattle Slew should never have been able to break so poorly, with all kinds of traffic around him, only to bust his way through to battle on the lead through fast fractions, and still win America’s most important horse race.