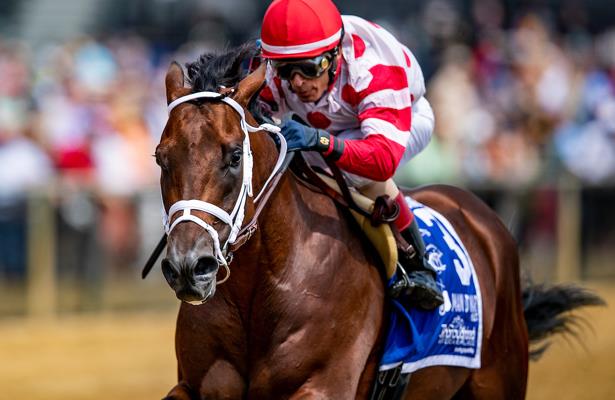 When King For a Day crossed the finish line first in Monmouth Park's Pegasus Stakes last month, the result came as a shock to most of the racing world.

Sent off as a prohibitive 1-20 favorite, Maximum Security was the horse everyone expected to win a simple prep for the million-dollar Haskell Invitational (G1) for a colt who six weeks earlier was disqualified from an otherwise authoritative Kentucky Derby score due to interference through the far turn.

But right on the heels of Maximum Security from the outset, Todd Pletcher-trained King for a Day had other ideas. The unheralded son of Uncle Mo collared the huge favorite in the stretch and then edged clear on his way to a one-length victory.

“I can’t say it surprised me,” said Pletcher. “We felt like he was doing well. You never know what’s going to happen when you’re running against a horse that crossed the finish line first in the Kentucky Derby, but we always felt like this colt was one of our top 3-year-olds for sure.”

A little post-race bravado maybe, but this is a colt who was always well liked.

As Maximum Security was marching through South Florida with multiple impressive victories on his way to his famous run in Run for the Roses, King For a Day received time to grow and develop. The layoff ended on Preakness Day when the Red Oak Stable runner finally made his 3-year-old debut in the Sir Barton Stakes. In this one, King For a Day was the big name, and he ran like it.

Perhaps it should have been noticed that in his first race in six months, King For a Day had set a stakes record in the easy win. But with Maximum Security headlining the Pegasus, he was relegated to "also in the field" status.

“He ran great in the Sir Barton and even better in the Pegasus," explained Pletcher.

Before we dive deeper into that Pegasus upset, let's rewind a bit to the juvenile version of King for a Day.

In his career debut, he was well backed in a maiden special weight race at Saratoga. Sent off at 3-1, he encountered some traffic on his way to a rallying, but well beaten third-place finish on Sept. 3. That maiden sprint at the Spa proved to be a key one, as both of the top two finishers, Complexity and Harvey Wallbanger went on to become graded stakes winners.

Building upon his potential, King For a Day came back one month later at Belmont Park. Stretched out to 8 1/2 furlongs, the 13-10 favorite was pressured through fast fractions early, but was still able to draw clear to a decisive 2 1/4 length victory. The maiden breaker was completed in racehorse time on 1:41 3/5.

The victory in his second career start was also impressive enough for him to be included in the first Kentucky Future Wager field of 2019.

That's right: The unheralded King For a Day, who seemingly came from nowhere to upset the Pegasus, was respected enough as a juvenile, to be one of the 22 horses included in the initial Derby future wager. On that list you will not find the name Maximum Security. Nor will you find any of the official winners of this year's Triple Crown legs, Country House, War of Will, or Sir Winston.

Perhaps all this confidence shown by his trainer was more than post-race bravado, after all.

"He's a horse we've always had very high hopes for," said Pletcher after his win in the Sir Barton. "He got a little behind schedule to make any of the Triple Crown races, but the owners are very patient. They just wanted to give him every chance to meet his expectations so we gave him a bit of a break this winter."

That break came after a fourth-place finish in the Kentucky Jockey Club (G2) in his third and final start at 2. He had an outside post and continued on in the 14-horse field, exiting with what owner Red Oak Stable's racing manager, Rick Sacco, described as regular juvenile growing pains.

Maturity and plenty of patience led to his successful, stakes record return on the Preakness undercard, but still, few expected him to do what he accomplished in the Haskell prep.

An impressive win to be sure, but it can be said that Maximum Security did not run his best in his first race following the Kentucky Derby. The Florida Derby hero is certainly eligible to improve for Saturday's rematch in the Haskell.

But on the other hand, so too is King for a Day. The impressive winner of his first two starts at 3 certainly looks like no fluke.

The son of Uncle Mo and Ubetwereven, a French Deputy mare who has now produced three stakes winners, has always been well liked. Now, it would come as no surprise if on Saturday he becomes King for (Another) Day.