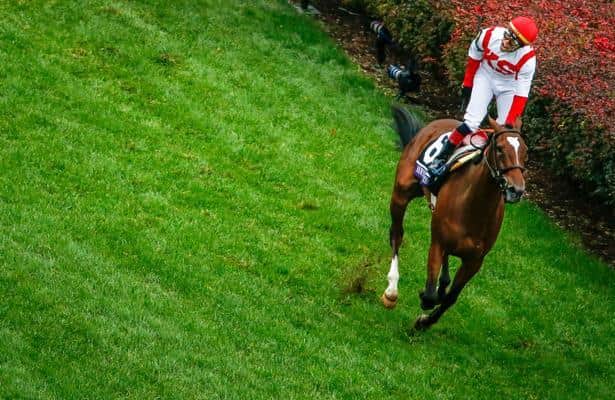 Accelerate, Monomoy Girl, and Enable may have been the biggest winners in last year's Breeders' Cup, but a pair of young fillies, Jaywalk and Newspaperofrecord, announced themselves as the future. Both took their best to Churchill Downs and left the championships as the most promising pair to have competed in the 2018 edition of the Breeders' Cup. This year was supposed to be more of the same.

Of course, what is supposed to happen and what actually happens are often different in the world of horse racing. Heading into Saturday's Belmont Oaks and Delaware Oaks, respectively, Jaywalk and Newspaperofrecord were a combined 0-for-5 in 2019. To say it was a disappointing first half of the year for the two most talked about fillies who turned 3 on New Year's Day would be an understatement.

On Saturday, of course, one righted the ship.

Winless in three starts so far in 2019, Jaywalk was not even sent off as the bettors' top choice in a field of six for the Delaware Oaks (G3), and with reason. The powerful winner of the Breeders’ Cup Juvenile Fillies in her final race at 2 had failed in all three tries this year, having faded to fourth in the Gulfstream Park's Davona Dale (G2) as the 1-5 favorite before finishing third in the Grade 1 Ashland at odds of even-money.

Jaywalk closed out her spring of discontent with a sixth place finish in the Kentucky Oaks (G1). Adding insult to injury, she was disqualified to 13th for bumping rivals leaving the gate that afternoon at Churchill Downs.

After a little break, her trainer was hopeful that the champion 2-year-old filly of 2018 would return to her old self on Saturday. His wishes were granted.

“She has matured some and put on some weight," John Servis said, "so we are excited to hopefully get her back on track.”

Back on track indeed. The daughter of Cross Traffic quickly made her disappointing beginning to the season a thing of the past with a stylish victory at Delaware Park. Ridden by Joe Bravo, and wearing blinkers for the first time, Jaywalk reminded us all of what we saw in her last year.

Breaking sharply in her first race in just over two months, Jaywalk took over the early lead in the 8 1/2-furlong test. Tracking her was the race favorite and romping winner of the local Light Hearted Stakes, Fashion Faux Pas. But the talented Arnaud Delacour charge would have no answers for the champion on this day.

Turning up the heat through progressively faster quarters through a six furlong split of 1:10.72, Jaywalk braced for the challenge from the race favorite. Down the stretch, though, it was abundantly clear who would prove best. Jaywalk poured it on late, hitting the wire a full nine lengths the best.

With the Monmouth Oaks (G3) and Cotillion (G1) mapped out for her as the next two starts, it would appear that Jaywalk is back and ready to finally pick up where she left off as the nation's champion juvenile filly.

Jaywalk was last year's champ, but to many, Newspaperofrecord was considered a filly with even greater potential following a big win in the Breeders' Cup Juvenile Fillies Turf which culminated an undefeated and overpowering season on the turf.

Big things were talked about, including a trip to Royal Ascot, but she too did not live up to expectations in the first half of her 3-year-old campaign.

Consecutive second-place results in the Edgewood (G3) at Churchill Downs and the Wonder Again (G3) at Belmont Park left her many fans wanting. They were not poor races, but not what was expected from the turf filly who had looked so dominant at 2.

A bit hard to handle while attempted to be rated on the lead in those first two efforts of the year, Newspaperofrecord had a new plan instituted for her biggest test so far this season. This time she would be taken off the pace early in hopes that she would kick it in late.

Despite the defeats, plenty was still expected from the athletic daughter of Lope de Vega in the Belmont Oaks (G1) on Saturday. Her trainer's disappointed assessment following the race, though, tells the tale.

No, it didn't. With Concrete Rose striding out to an easy and impressive victory in the 10-furlong Belmont Oaks, Newspaperofrecord fought her rider much of the way before fading home to a well-beaten ninth-place effort.

While Jaywalk was allowed to roll early and make the most of her natural speed, Newspaperofrecord has been consistently asked to hold back in an effort to finish well. After the biggest experiment, in the Belmont Oaks, it's clear that this is something the filly has no interest in doing.

It's time to let Newspaperofrecord loose. Let her free to run early, and see how far she can take them. Then, and only then, might we see things turn around for her in 2019, just as Jaywalk was able to do in the Delaware Oaks.