Zipse: Why Code of Honor's a top Kentucky Derby longshot 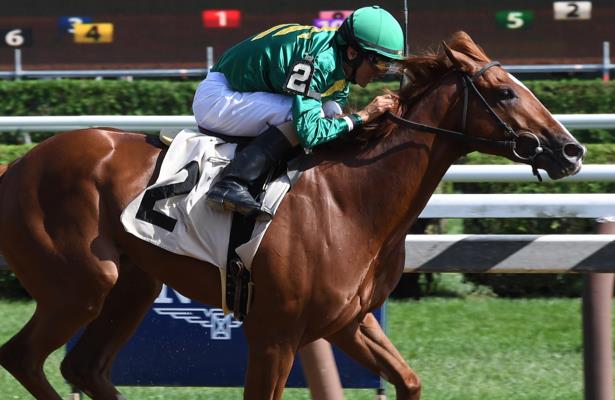 Code of Honor will not be one of the favorites when the field makes its way into the starting gate for the 2019 Kentucky Derby, yet there is a whole lot to like about the Shug McGaughey-trained chestnut.

His fate as a Derby longshot was sealed when he finished a non-threatening third in his final prep for the first Saturday in May. That result in the Florida Derby (G1), combined with an unspectacular lifetime record of 2-for-5, should see his odds in the 15 or 20-1 range.

And that kind of price could end up a steal.

William S. Farish's homebred won smartly at first asking last summer at Saratoga and moved right up to the big leagues for his second career start. He could only manage a runner-up finish in the Champagne Stakes (G1) at Belmont Park, but it was his rally, after a bad stumble at the start, that caught the eye of many.

Unfortunately, the son of Noble Mission's promising juvenile season came to a close without a start in the Breeders' Cup Juvenile at Churchill Downs, after he spiked a fever the morning of the race.

Code of Honor returned  three months after the Champagne to make his 3-year-old debut in the Mucho Macho Man Stakes on the speed favoring track at Gulfstream Park. The performance was rather forgettable, as he checked in fourth.

Things took a turn for the better next time. Trained harder for his second start off the layoff, Code of Honor rallied strongly off a testing early pace to score an impressive victory under John Velazquez in the Fountain of Youth Stakes (G2).

Without any real pace to soften up the leaders in the Florida Derby, Code of Honor could do no better than third. Still, he finished ahead of all rivals other than Maximum Security and Bodexpress, a maiden who simply chased the winner. The Kentucky Derby should offer a more favorable scenario.

As far as early pace pressure, the biggie on May 4 will probably be closer to the Fountain of Youth than the Florida Derby, with a good number of horses that like to be on or near the early lead. The 10 furlongs of the Derby should also help Code of Honor pick up the pieces. His sire was a Grade 1 winner at 12 furlongs, and the Derby almost always has a host of leg-weary runners as the field comes spinning out of the far turn.

Bred to handle the distance, and still lightly raced enough to hope for real improvement, Code of Honor will also have Kentucky Derby-winning experience from his Hall of Fame connections going for him.

His trainer, Shug McGaughey, took the 2013 running with Orb. Like McGaughey's charge this year, Orb did all his early running that season at Gulfstream Park. The veteran trainer also finished both second and third behind Sunday Silence in the 1989 edition of the Kentucky Derby with Easy Goer and Awe Inspiring.

Code of Honor's jockey, meanwhile, has found even more success in America's most prestigious race. Velazquez won the roses with Animal Kingdom in 2011, and then again with Always Dreaming in 2017.

If the 47-year old rider is to win his third Kentucky Derby, he will likely need to find a similar trip he worked out in his first victory eight years ago. That afternoon, horse and rider came from well off the pace to score Derby glory at odds of 20-1.

I could certainly see a similar outcome in this year's Kentucky Derby.

They say that pace makes the race, and they are right. It's the single most defining aspect of handicapping any race, and that includes the Kentucky Derby.

In the Florida Derby, Code of Honor got no pace to run at, but in the big one, look for him to be picking off tiring foes as the field hits the stretch. That's why he's my top Kentucky Derby longshot.