Zipse: Bricks and Mortar well on his way to Horse of the Year 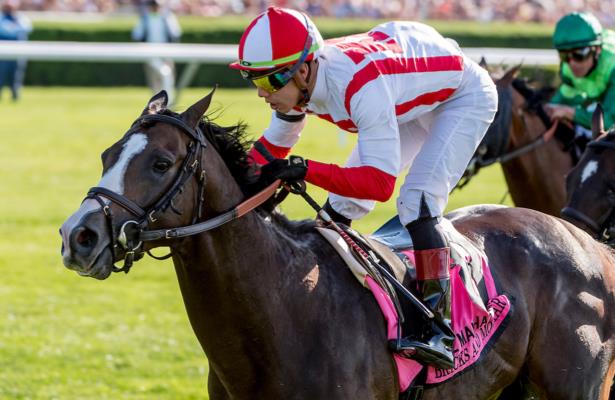 Who is the most dominant horse in American racing? Bricks and Mortar, the 5-year-old son of Giant's Causeway, strengthened his case for that claim on Saturday with a comprehensive victory in the Manhattan (G1) at Belmont Park. It is a victory which I believe puts the Chad Brown trainee well on his way to earning Horse of the Year.

With the season only about half over, there is still plenty of work to be done. And considering how difficult it is for a turf horse to take home America's top yearly award, it might seem rather premature to anoint Bricks and Mortar just yet. But there seems to be little standing in the way of this runaway train in the season's second half.

Perfect in five starts since returning from a 14-month layoff, Bricks and Mortar has already taken care of business on some of the year's biggest days. His three Grade 1 victories this year have come with the world watching on Pegasus World Cup day, Kentucky Derby day, and Belmont Stakes day.

In each, the Pegasus World Cup Turf at Gulfstream Park, the Turf Classic at Churchill Downs, and the Manhattan at Belmont Park, Bricks and Mortar faced different types of turf conditions and different distances to deal with. It made no difference as the $200,000  Keeneland September Yearling Sale purchase won each with what is becoming a very familiar method of operation.

Relaxed and comfortable early under Irad Ortiz, Jr., Bricks and Mortar bides his time while his rider gets him in position to exploit his superiority. Showcasing exceptional turn of foot, the big horse does the rest. Ambling to the lead, he is confidently ridden to  the wire. The ease of it all was on full display on Saturday.

Stopping the timer in 1:58 flat for the 10 furlongs, the dark bay proved that he can get it done over a very firm turf, while also running the furthest he's ever run. That could be the distance for the next test as well with the prestigious Arlington Million (G1) on August 10 likely for the streaking turf star.

"He had an early start in December and to keep it going at this level, it's just been a remarkable run," said Brown "There are a lot of Grade 1s next to his name and on the turf that's hard to do."

Hard to do, yes, but also hard to see it ending anytime soon. With Catholic Boy, who could well be the next best turf horse in the country, likely pointing for dirt races for the time being, it would seem that Bricks and Mortar has the male turf division over the proverbial barrel.

Always good, he won at first asking, and quickly became a stakes winner at 3. Bricks and Mortar has since improved his lifetime record to a stellar 11: 9-0-2 mark. Owned by Klaravich Stables and William H. Lawrence, his lone two losses also came at 3 when beaten by less than a length after troubled trips in both. Since the layoff, though, he has taken things to a whole new and exciting level.

Still, 14 months off raises questions. His trainer has reason to believe that he will be a healthy horse for the rest of his 5-year-old campaign.

I just don't see much out there that could run with him. Perhaps Catholic Boy would make it interesting. Then there is a question of distance, as Brown has said the Breeders' Cup Turf's 1 1/2 miles isn't a fit, while the Mile could prove too short. Could he skip the championships altogether?  For the time being, Bricks and Mortar is far and away the class of the division.

But can he join Wise Dan as only the second turf horse to be named Horse of the Year in the 21st century, when other recent turf stars like Tepin and Flintshire could not? This would seem to be a very good year to do it, with no dirt horses clearly yet announcing themselves as leaders.

Clearly Bricks and Mortar has done just that. From Florida to New Orleans, and from Kentucky to New York, he has already proven to be the cream of the American turf crop. The 2019 Horse of the Year? I like his chances.