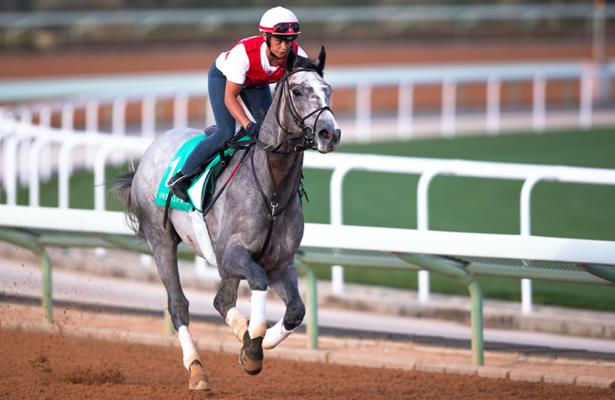 How good was 2019's 3-year-old crop? Despite being contested halfway across the world, Saturday's inaugural edition of the $20 million Saudi Cup should give us a better indication as these stars look forward as 4-year-olds.

To be televised on Fox Sports 1, with a post time of 12:40 p.m. ET, the Saudi Cup will be contested around one turn at nine furlongs on the dirt at King Abdulaziz Racetrack. Drawn by the riches, the event not only gives us a nice mix of American runners taking on internationals, but it also features three of our top returning 3-year-olds matched against more seasoned performers.

When discussing returning stars of last year's Triple Crown set, you must start with the champion. Maximum Security, a winner of seven of nine lifetime is best known for a race he did not officially win. He bravely held all his competition sway in last year's Kentucky Derby, only to be taken down for interference coming out of the far turn.

While it was a stewards decision that shook the racing world, the reformed claimer proved himself a deserving champion after the first Saturday in May. Consecutive victories in the Haskell Invitational (G1), Bold Ruler (G3), and Cigar Mile (G1) cemented the Jason Servis trainee on top of the division, and promised big things to come as an older horse.

As has been true for his entire career as a graded stakes horse, the accomplished son of New Year's Day will be facing a new and interesting challenge in the Saudi Cup. Making his first start in nearly three months, he'll be tested by the most credentialed field he's ever faced, and one with plenty of speed. New challenges or not, Maximum Security showed us enough last year to be considered the horse to beat in here.

Among his stiffest competition on Saturday is a pair of familiar faces from the 3-year-old season.

Mucho Gusto is the only one to race so far in 2020, and it was a pip. Perhaps best known last year for his bang up performance when runner-up behind Maximum Security in the Haskell, the son of Mucho Macho Man comes into the Saudi Cup off a dominant victory in the Pegasus World Cup (G1) on Jan. 25. Despite it being a watered-down edition, the Bob Baffert trained colt ran big, and comes into the Saudi Cup for his second shot against last year's champ in top form.

Then you have Tacitus. After being placed third in last year's Kentucky Derby, the son on Tapit was the beaten favorite in each of the Belmont Stakes, Jim Dandy Stakes (G2) and Travers Stakes (G1), running second in all three. The winner of the Tampa Bay Derby (G2) and Wood Memorial (G2) earlier in the year, he closed out the season by finishing third in the Jockey Club Gold Cup (G1) in his first try against older horses. Somewhat the forgotten horse of the crop, he should get plenty of pace to run in the Saudi Cup.

While it's an impressive group of newly turned 4-year-olds, their task will be far from simple on Saturday. One of the big reasons why is another from the Bob Baffert barn, McKinzie. Only once in his 14-race career has the son of Street Sense finished worse than second, while racing in strictly graded stakes events since winning his career debut.

An impressive winner of last summer's Whitney (G1) at Saratoga, the tactical runner is well proven at the nine-furlong distance and has been working well for his raid on the Middle East. You'll remember when last seen, the consistent 5-year-old ran second behind Vino Rosso in the Breeders’ Cup Classic. Now fully mature, he may represent the biggest shot to keep his younger rivals out of the winner's circle.

Another extremely intriguing contender in the Saudi Cup will come from the distaff set. Very good at both 2 and 3, Midnight Bisou proved a revelation last year at 4. The daughter of Midnight Lute won seven consecutive graded stakes all over the country to begin her 2019 season.

With a strong late kick, and a visible desire to get to the wire ahead of her competition, she easily raced to an Eclipse Award despite finishing second in her season finale in the Breeders' Cup Distaff. Trained by Hall of Famer Steve Asmussen, she is consistent as they come, likes the one-turn trip and should benefit from a contested early pace.

Those are the Americans, and it could well come down to them in Saudi Arabia. But an experienced group of internationals is not without hope on Saturday.

Chief among them is Benbatl. Not only an experienced horse of top class, but he also comes into this big race in top form. Two strong wins already this year are highlighted by the Godolphin runner's recent win in the Al Maktoum Challenge Round 2 (G2) in Dubai, which came in his first ever try on dirt. At 7, and back from a trip to the breeding shed last year, the son of Dubawi looks as good as ever in a career that has seen him run well all over the world.

One of the more interesting longshots in the Saudi Cup is Gronkowski. Now 5, he's known to U.S. fans for a good second behind Justify when that one clinched the Triple Crown in the 2018 Belmont Stakes. The son of Lonhro also finished a bang-up second to Thunder Snow in last year's Dubai World Cup (G1). He made up only moderate ground last out when third behind Benbatl in the Al Maktoum Challenge Round 2, but improvement could be expected for the well traveled horse.

Speaking of well traveled, how about the 5-year-old mare, Magic Wand? The daughter of Galileo has literally been all over the world for trainer Aidan O’Brien, while running in many of the world's top turf races. Most recently second in the Pegasus World Cup Turf Invitational, she has nine times been a bridesmaid, while managing to collect more than $4 million in earnings. She will be making her dirt debut on Saturday, but she adds one more element of class and experience to this eclectic group.

All in all, the Saudi Cup promises to be one of the best fields that will be assembled in 2020. It also gives the opportunity for the 3-year-olds of 2019 to prove they can not only compete with, but surpass their older rivals this year.