Zee Bros Dashes away in the De Francis Memorial 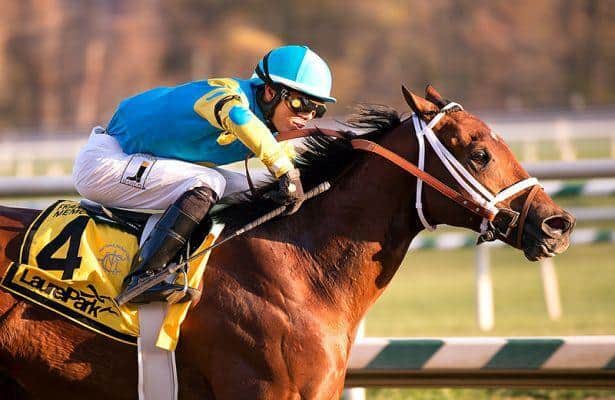 The last time Zee Bros ran in the state of Maryland, he romped home an easy winner of the Chick Lang Stakes on the 2013 Preakness undercard. At the time, he looked like an up and coming star in the sprint division. Flash forward a year and a half to this afternoon, and Zee Bros was a forgotten horse going into the 23rd running of the $350,000 Frank J. DeFrancis Memorial Dash. Forgotten no more, Zee Bros sprinted home down the Laurel Park stretch to win by 2 ¾-lengths as the longest shot on the board.

Trained by D. Wayne Lukas, and owned by Zayat Stables, Zee Bros was made a 29-1 outsider on the basis of a nine race losing streak that followed his Chick Lang success. He finally broke that losing streak in his last race, but the allowance win going 5 ½ furlongs on yielding turf at Keeneland, did little to convince bettors that he was ready to handle a deep and talented field of sprinters today, but that is why they run the race.

In making only his fourth start in the Lukas barn, Zee Bros went right after early leader Favorite Tale through testing early fractions. The pair zipped through splits of :22.01 and :44.87, but only one could go on. As his early competition backed off, it looked like a host of others would make a run at Zee Bros as the field turned for home, but a real threat would never come, and Zee Bros cruised to the wire an easy winner.

Happy My Way was game in the stretch to hold off Bern Identity for second, while the race favorite, Dads Caps, checked in fourth.

The winning rider, Jose Ortiz, was originally scheduled to ride the filly La Verdad, but picked up the mount after that one was scratched. Ortiz filled in aboard Zee Bros for Alex Cintron, who was injured, including a broken jaw, in a spill at Laurel yesterday.

“Mr. Lukas told me that this horse had the talent and the speed, to make sure that we broke well and go after it,” said Ortiz. “I kept him exactly where he needed to be and when I asked him he gave me all that I needed. I was pretty sure I had them beat about half-way down the stretch.”

Assistant trainer Tim Austin took care of saddling duties today for Lukas, and was complimentary of his boss after the win. “Nobody does it better than Wayne when it comes to running in the big races,” said Austin. “We got this horse right after the Saratoga meet. It took a few weeks to figure him out but in his last four workouts, I know they saw a big improvement in him. This horse is really doing well right now and we are glad to win this race for Mr. Zayat.”