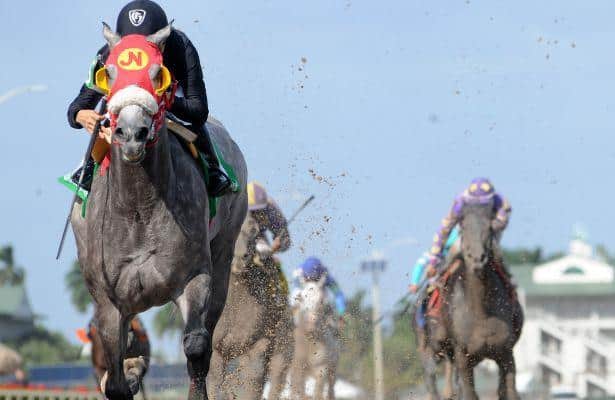 With all due respect to the very popular recent victories of Runhappy and California Chrome, a solid case could be made that the strongest performance on American soil in the past month, was the one turned in by Gelfenstein Farm’s X Y Jet on December 19 at Gulfstream Park. The grey gelding broke on top that afternoon and would never look back, as he romped and rolled to a 9 ¼-length runaway in the Grade 3 Mr. Prospector. If the complete domination of the stakes sprinters in the field was not enough, than the winning time of 1:08.56, for the six furlongs, put an exclamation point on the blistering performance. Back for an encore Saturday, the Florida-bred will be in search of his first win as an older horse when he tops a field of eight in the Sunshine Millions Sprint.

One of the more interesting events on the Sunshine Millions Day card, the $150,000 six furlong affair also has attracted the racing millionaire, Wildcat Red. While X Y Jet has the huge last race to build on, his five-year-old challenger has plenty of back class from which to draw, including a pair of graded stakes victories on the local oval back in 2014.

More recently, Wildcat Red accounted for a solid edition of the Teddy Drone Stakes on Haskell Invitational afternoon at Monmouth Park, before finishing 4th and 5th in a pair of Grade 1 races in New York to complete his four-year-old season. Freshened for trainer Jose Garoffalo, the son of D’Wildcat will be making his first start in nearly four months on Saturday. A quality performer to be sure, he should find that this is no easy return race, due primarily to the presence of X Y Jet.

Trained by Jorge Navarro, the four-year-old son of Kantharos looked to be developing into a very nice sprinter early last year when he finished second by a half-length in the Grade 3 Hutcheson, also at Gulfstream Park, but he stumbled badly and was eased in his next start. After six months off, X Y Jet has come back with three straight wins, but it was in his last race where he really opened people’s eyes.

The horse that Navarro calls his next Private Zone, put on an absolute show in the Mr. Prospector. In a field full of older graded stakes winners, X Y Jet threw down fractions of :21.92 and :44.29. His competition could not keep up, with their only hopes resting on their younger competition wilting from his scorching early fractions. Wilt he did not. In fact, X Y Jet only lengthened his margin all the way to the wire, under Emisael Jaramillo, who will again ride him on Saturday. A similar performance will leave Wildcat Red, and the rest of the field at his mercy. The others in the Sprint lineup includes; El Botas, C. Zee, Alfredo Romana, Ackeret, Puntrooskie, and It’s Not Me.

And don’t forget racefans -- the Sunshine Millions Sprint is one of six stakes worth $1.05 million on Saturday’s card, led by the $250,000 Classic. The excellent day of racing will only be part of the story at Gulfstream Park, as the festivities of the 45th Eclipse Awards will begin soon after the racing ends.