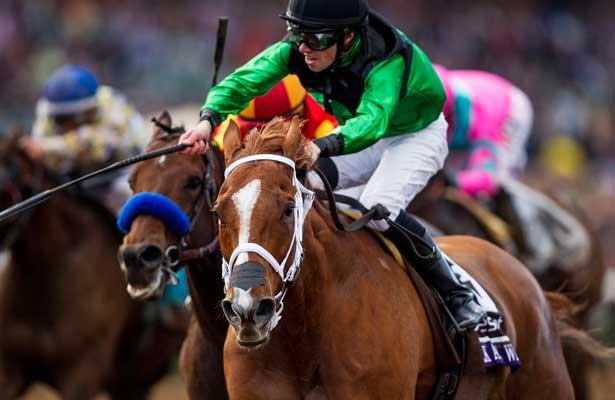 With the expected return of Work All Week in next Saturday’s Aristides at Churchill Downs, which would be his first start since a triumphant run in the Breeders' Cup Sprint, it would seem the perfect time to look back at the remarkable racing career of the 2014 Champion Sprinter through his first three seasons on the track.

A Midwest Thoroughbreds homebred, Work All Week is a son of City Zip, out of the Repriced mare, Danzig Matilda. He began his career late in his three-year-old season on the grass at Hawthorne Park, and an inauspicious beginning it was. Trained by Roger Brueggemann, and ridden by Florent Geroux, the 6-1 shot never really threatened in the 1 1/16 mile turf race for state-bred maidens, ultimately checking in with a sixth-place finish. It would be his only start at three.

At four, the fortunes of Work All Week would quickly turn around. Back at Hawthorne, he sprinted through his first two starts as an older runner. In a state-bred maiden race going six furlongs, Work All Week made all the running under Chris Emigh, and came home nearly seven lengths the best. Confirming what we all know by now, his affinity for sprinting, the chestnut gelding blitzed his Hawthorne competition next out, winning by better than a dozen lengths. Of note, his running time in his third career start was 1:09.18 for the six panels. A time not too often seen at the Cicero, Illinois racecourse.

He kept the winning streak of impressive victories going in his first start on the all-weather surface at Arlington Park. Reunited with Florent Geroux, Work All Week again won easy, and in fast six furlong time. Stakes racing beckoned, but his first try in an added money event would end with a tough beat. After setting a fast and pressured pace in the Addison Cammack Handicap, the heavy favorite opened up early in the stretch, but was nailed on the wire by the rallying, fellow Illinois-bred, Sweet Luca. It was his first defeat in the sprinting game, but it was not something in which he would need to grow accustomed.

After the narrow loss at Arlington, Work All Week would win four consecutive races at four different tracks to close his 2013 season. They would come in a 6 ½ furlong allowance race at Arlington, a 5 ½ furlong allowance race at Indiana Grand, and a pair of six furlong stakes races, his first two stakes victories of his career, in the Tex’s Zing at Fairmont Park, and the Lightning Jet at Hawthorne. In each of those winning efforts, the Midwest Thoroughbreds’ star dictated things early, before cruising to relatively easy victories. In total, Work All Week raced 8 times in 2013, winning seven, with his only loss coming by a nose. He was Illinois’ best horse, but as a national audience was about to learn, this Illini bred could run with anyone.

Work All Week’s championship season of 2014 began with victories against a pair of solid fields at Oaklawn Park. Those wins, in an allowance race in January, and in the Hot Springs Stakes in March, led him to a sprinting showdown with the multiple stakes winner, Delaunay. Work All Week was respected at 5-2, but it was Delaunay at 11-10, that was made the clear favorite of the Iowa Sprint Handicap in June at Prairie Meadows. The favorite threw everything but the kitchen sink at Work All Week, but the game gelding would not be denied, edging away to a half-length win in 1:08.16. The big victory stretched his winning run to seven, but that would be the last of the streak.

Remember the Addison Cammack Handicap from 2013, and the winner of that race, Sweet Luca? Well, they were back again on the dance card, and in the way of Work All Week. Again foiled by fast early fractions on the Polytrack, Sweet Luca ran right by the 7-10 favorite to repeat in the state-bred stakes race. Work All Week settled for second place money, but given a little freshening, he had bigger fish to fry that fall.

In his first graded stakes race of his career, Work All Week faced a quality group in the historic Phoenix Stakes at Keeneland. If his victory over Delaunay in Iowa did not announce himself as a major player in the national sprint division, this victory in Kentucky’s bluegrass surely did …

A newly minted graded stakes winner, the still somewhat unheralded, and disrespected gelding from Illinois traveled out to California and the Great Race Place for an opportunity in America’s most important race for sprinters as a supplemental nominee. Sent off at an astounding 19-1 price in the loaded field of 14, once and for all, Work All Week, under Florent Geroux, would earn his much deserved respect. He was fast, he was game, and on November 1 at Santa Anita, he became a champion.