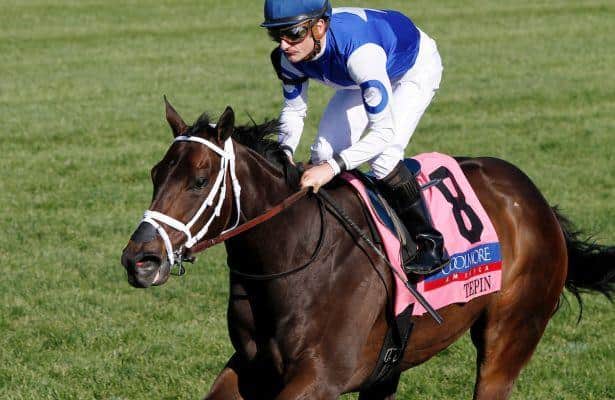 In a wonderful card of turf racing Saturday at Woodbine, it will be the Grade 1 Ricoh Woodbine Mile taking center stage. The million-dollar event, of course features the return of the American hero, Tepin. She will be making her first start since a triumphant run in the Group 1 Queen Anne Stakes at Royal Ascot back on June 14. While a national turf treasure here in the States, don’t expect her first trip to Canada to be a walk in the park. Without further ado, let’s take a look at my selections and projected odds …

2) Mutakayyef (5-2) – The five-year-old son of Sea the Stars has been a consistently good horse in Europe, but this season he has discovered a whole new level of racing. Two strong wins to begin the season for the Shadwell Stable charge, including an impressive win at Ascot, point out his fondness for the one-mile trip. It was in the last race, the Group 1 Juddmonte International, though, where he demonstrated just how good he has become. Going against the top turf horse in Europe, Mutakayyef looked like a winner in deep stretch before getting totally shut off. You never know for sure if he would have finished the deal against Postponed that afternoon, but having watched the race, I believe he likely would have. He cuts back in distance, and crosses the pond, but Woodbine should suit him just fine. If he is ever going to defeat the great mare, I believe this is the time.  The Upsetter

8) Tepin (4-5) - Picking anyone over the mighty Tepin is nearing sacrilege, and I understand that, but if she does go down to defeat this year, this would be the preferable spot rather than at the Breeders’ Cup. Listen, if she runs her absolute best for Team Casse and Julien Leparoux on Saturday, I believe she stretches her win streak to eight, but I think there is enough reason to think she might not be at her tip-top for this one, to favor the sharp European at the odds. First off, this will be her first trip to Woodbine, and it is a little different than American courses. Considering she just won at Ascot, that seems a bit silly, but every little piece matters. Most importantly, this will be her first race in three months, and since a tough race at Ascot, and back and forth trips overseas. I applaud her if she overcomes that, and as a fan, I will be rooting for her to win, but as a handicapper, I believe Mutakayyef is the better play. Vulnerable in Return

3) Arod (10-1) – Last year, he was the sharp European, having run several very high quality races, especially at a mile. Take special note of that second-place finish in the Group 1 Sussex Stakes, where he was beaten a mere half-length by the excellent Solow. He was one of the top milers in Europe, but an unsuccessful trip to Australia late las year might have taken something out of him. He would be hard to recommend of this year’s 0-for-4 form, but in his last race, he seemed like he might be rounding back into form. If true, and he can find his best running of last year, he is in with at least a shot. Plenty of Back Class

5) Full Mast (15-1) - Joel Rosario comes in from New York for the mount for the Bill Mott trained import, who has done little wrong since arriving to North America. Having said that, he has been unable to find a win in his two stakes tries on this side of the pond, and things only get tougher on Saturday. A little improvement off the last at Saratoga, though, in which he was right there with Shining Copper and Jay Gatsby, would make him an interesting contender to get into the exotics. Could Improve

7) Mr. Owen (15-1) – The Pennsylvania-bred, European colt made up some ground in last year’s edition of the Woodbine Mile, without ever really getting involved. Can he do better this year? It’s possible, but I did like his form coming in last year just slightly better, and this year only seems tougher. That being said, having Jaimie Spencer in the irons does not hurt his chances to make some noise. Wildcard Player

1) Tower of Texas (15-1) – Of the local horses, this Roger Attfield-trained gelding is the one I like best. He fires just about every time, and while not winning, his last two, in which he was closing strongly at the end of two sprints, should have him geared to run his best in this one. Having said that, he was a little disappointing in this same race last year. Late Rally for a Share

4) Glenville Gardens (12-1) - Eventually, all good things must come to an end. Not only does the Sid Attard-trained former claimer come in off three straight wins, but he has a wonderful record over the Woodbine turf course. The problem is, he likely has found his ceiling for success, and by trying this, he may have now found a level just a bit too high. Winning Streak Ends

6) Passion for Action (20-1) – I hate to pile on the local horses, and this one certainly has been a hard-knocking runner throughout his Woodbine career, but from a class perspective, I just do not like his chances to run with the top two especially. Not in this Spot