Wonder Gal wins the historic Ladies Handicap by a pole 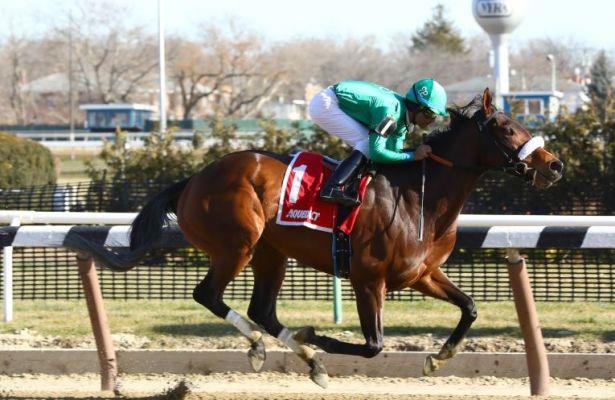 Lead a good horse to a track favoring speed, give her a comfortable lead, and look out. So it was today at Aqueduct Racetrack. In an overpowering, front-running performance, Wonder Gal kicked off the 2017 season by thoroughly dominating her opposition in the historic Ladies Handicap to the tune of a 13 ½-length runaway.

Sent off at odds of 3-2 in the compact field of five, the five-year-old daughter of Tiz Wonderful entered today’s feature off a tough defeat in the Grade 3 Go For Wand last month. That afternoon she lost her early advantage late, and was on the wrong end of a three-horse photo for the win. Things would be very different in the Ladies. Teeming with tradition, but no longer a graded affair, the $100,000 event is the oldest stakes race in America for fillies and mares. It is extremely unlikely that Wonder Gal will become the seventh winner of the Ladies to make it into the Hall of Fame, but today she looked the part.

Sent right to the lead from her inside post position under rider, Kendrick Carmouche, Wonder Gal made all the pace in the two-turn race. Briefly challenged first by Jet Majesty, and then by Always On My Mind, the New York-bred mostly had things easy as she cruised down the Big A backstretch through fractions of :23.70 and :47.73. By the time the group of fillies and mares hit the far turn, she was beginning to open up on her nearest competition.

Spinning out of the turn, and saying goodbye out of her rearview mirror, it was quickly clear that the trophy was hers. While Highway Star and Always on My Mind, the two fillies given a chance to beat her by the bettors, began to pack it in, Wonder Gal poured it on down the lane. Lengthening her advantage with each and every stride, the Leah Gyarmati-trained mare cantered to the wire the easiest kind of winner. A pair of longshots filled out the top three, but both Chorus Line and Jet Majesty were a long way back.

"Once I got to the half-mile and I heard the guys scramble back there, I just opened up," remarked Carmouche. "I said it was going to be a do-or-die situation. It worked out today. I just want to say congratulations to [trainer] Leah Gyarmati and her team.

The final time for the 1 mile and 70-yards over an Aqueduct inner track labeled as fast was 1:42.45. With the Ladies Handicap victory, Wonder Gal raised her lifetime record to 17-4-2-6 for her owners, Clearview Stable. A big winner of a stakes race in her career debut, and third in the 2014 Breeders’ Cup Juvenile Fillies way back when, this was her third career stakes win, but her first since October of 2015.

"Obviously, her performance today was spectacular,” beamed winning trainer, Gyarmati. “She seemed like she did it so easily. She ran that big race up at Saratoga [September 2] and she was training so well heading into that race. It kind of set her back a little bit, but going into this race she started having those same works as she did back then. I'm just so thankful for this performance."