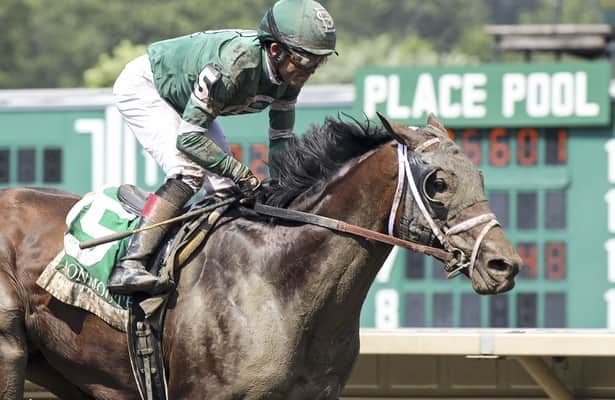 When Dr Post finished second to Tiz the Law in last year’s Belmont Stakes while making only his fourth career start, it appeared he was on the fast track to big things. Of course in racing, things rarely work as smoothly as planned. With an impressive win Saturday in the Monmouth Cup (G3), perhaps the son of Quality Road is ready to begin living up to his high expectations.

Trained by Todd Pletcher, the handsome dark bay ran a strong Belmont behind the powerhouse performance of the winner. Heading into the big test, he had made only one start in July of his 2-year-old season before returning to win a maiden race and a minor stakes race, both at Gulfstream Park, in March and April of last year.

It appeared Grade 1 racing was where the St Elias Stable runner belonged, but then the train began to slowly fall off the track.

Dr Post followed last year's Belmont Stakes by running third in the Haskell Stakes (G1) in July at Monmouth Park. It was not necessarily a poor performance, but it was disappointing not to see him put up much of a fight with Authentic and Ny Traffic in that million-dollar race.

Next he went up to Saratoga, and there he laid an egg, finishing fourth behind Mystic Guide as the odds-on favorite in the Jim Dandy (G2). Just a few months after his impressive performance in the Belmont, he was suddenly the forgotten horse, not to be seen again on race day for some eight months.

Perhaps the Belmont had been too much too soon, or perhaps Dr Post still needed to mature.

His return to racing was promising, registering a 1 1/2-length victory in the Westchester Stakes (G3) at Belmont Park on May 1. The performance at a one-turn mile was solid, but defeating the likes of Wicked Trick and Mr. Buff was not enough to prove he was ready for the big boys. He would get his shot, though.

Five weeks after his return, Dr Post was bumped at the start and finished a well-beaten fifth behind Silver State in the Met Mile (G1). The four horses that finished ahead of him are all top notch, but once again the result was far from what was expected.

It certainly was a far cry from what his sire Quality Road had done in the same race 10 years earlier. Maybe he will never be as brilliant as his talented and volatile sire, but it is too early to give up on the colt as a major winner.

They are two very different types of horses, but Pletcher and Vinnie Viola of St Elias Stable were willing to be patient with Vino Rosso a few years ago, and they were rewarded with a Breeders’ Cup Classic and Eclipse Award.

Looking for answers, Pletcher made an equipment change with Dr Post for his third start of the season. Racing with blinkers on for the first time in the $300,000 Monmouth Cup, the 4-year-old responded.

More focused and comfortable early, he swung into action in the far turn and circled the field well wide. Then her motored down the stretch to an impressive victory in 1:47.53 for the 9 furlongs. I believe it was his best overall performance to date.

It didn’t come against Grade 1 competition, but putting away nice horses such as Night Ops, Bankit and Ny Traffic the way he did, has me once again hopeful for big things from Dr Post.

Pletcher is now talking about the Pacific Classic (G1) on Aug. 21 at Del Mar or the Jockey Club Gold Cup (G1) on Sept. 4 at Saratoga as options for his next start.

Both races not only would give him another shot in Grade 1 company, but they both are Breeders’ Cup “win-and-you’re-in” qualifying races for the Breeders’ Cup Classic (G1) on Nov. 6 at Del Mar.

After the equipment change and his performance on Saturday at Monmouth, he is right back on my radar for the year-end big one. With blinkers on, Dr Post might yet accomplish big things.