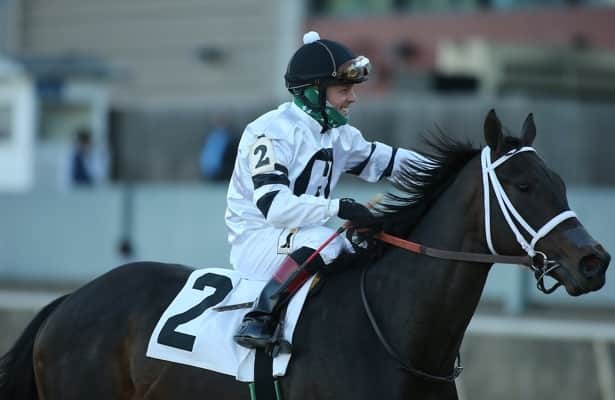 The 2021 Kentucky Oaks is less than eight weeks away, and unlike the splash that top Kentucky Derby contenders Life Is Good, Essential Quality and Greatest Honour have been making, their female counterparts have been running in relative anonymity. A case in point is the current leader of the Oaks points race, Will’s Secret.

A Willis Horton Racing homebred, Will's Secret thrust her name atop the leaderboard with a workmanlike victory Saturday in the Honeybee Stakes (G3) at Oaklawn Park. The 50 points earned there gave her 60 total, all but securing her place in the Kentucky Oaks starting gate at Churchill Downs on April 30.

The question then becomes, can she actually win it?

With each passing start, the possibility looks more realistic. After needing four starts to break her maiden last season, Will’s Secret now has won three in a row for trainer Dallas Stewart. The first two came with relative ease, as she proved best in a 1 1/16-mile maiden race at Fair Grounds in December before cutting back to a mile to romp in a muddy edition of the Martha Washington on Jan. 30 at Oaklawn Park.

In the Honeybee, she showed a new dimension by doing things on the front end. It was a race where no filly really wanted the lead, so despite a pretty strong hold early by veteran rider Jon Court, the daughter of the champion Will Take Charge challenged Tabor Hall for the lead through moderate early fractions.

After rallying for easy victories in her previous two starts, Will’s Secret was pressured throughout the race, and she proved her toughness in this one.

Never given her a real breather, she dispatched of Tabor Hall on the turn and was then game down the lane, holding off persistent stretch bids from a pair of talented fillies in Pauline’s Pearl and Sun Path. The gritty 3/4- length victory in 1:44.61 might not look pretty on paper. But it not only validated her win in the Martha Washington, it also proved her class and versatility.

As a daughter of Will Take Charge, out of the Giant’s Causeway mare, Girls Secret, Will’s Secret should only get better with distance. The added 16th of a mile of the Kentucky Oaks will be right up her alley. And much like her Eclipse Award-winning sire, she also seems to get better the more she races.

We can expect her to get in one more race before the big test. Her trail to Churchill Downs and the Kentucky Oaks is likely to remain at Oaklawn Park for its final prep, the Fantasy Stakes (G3) on April 3, where she will look for her fourth consecutive victory.

Other fillies out there, such as Clairiere, Travel Column, Vequist and Malathaat, may have more sizzle as we approach the most prestigious race of the year for 3-year-old fillies, but none can boast the recent form of Will’s Secret.

She also has Dallas Stewart on her side. Seldom talked about among the nation’s elite, the 61-year-old trainer has guided the careers of two Breeders’ Cup Distaff winners in Unbridled Elaine and Forever Unbridled. Perhaps more important in the next eight weeks, he also has gotten a lot out of several long shots in the spring at Churchill Downs.

In 2006, Stewart won the Kentucky Oaks with Lemons Forever, who was the longest shot to ever win the race. Seven years later, he saddled 50-1 shot Golden Soul to finish second to Orb in the 2013 Kentucky Derby, and the next year he once again came home runner-up in the Run for the Roses, with long shot Commanding Curve.

Will’s Secret is not one of the favorites yet for this year’s Kentucky Oaks, but the way she is going, she will not be a long shot either. Currently flying just under the radar in Arkansas, there is plenty to like about her as a legitimate Kentucky Oaks contender on April 30.