Will Separationofpowers be the next big thing? 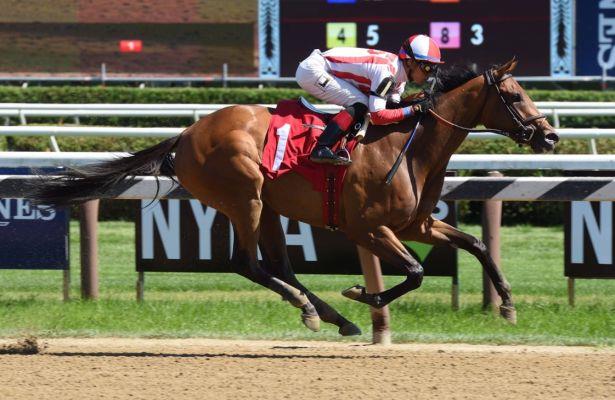 On this, the day of the announced retirement of Songbird, it's only natural to look back at her stellar career fondly, but it's also natural to look forward. Who might be the next filly to arouse the senses with a two-year-old season of brilliance and dominance? Perhaps we should look no farther than the track where Songbird's career ended. Perhaps the next big thing is hiding in a small field in Saturday's 126th running of the Grade 1 Spinaway Stakes at Saratoga.

With an automatic entry into the $2 million Breeders' Cup Juvenile Fillies waiting for the winner, the historic race for young fillies drew only five, but it's an interesting five. Four of them come in undefeated. The horse to beat on paper is Pure Silver. The daughter of Mission Impazible is perfect in three starts, already with two stakes wins, including a local romp in the Grade 2 Adirondack. She very well could win again, but it's actually another filly in the race on which I have my eye. She may just have the potential to be something special.

It would not be an exaggeration to say that Separationofpowers may have been the most impressive two-year-old I've seen yet this season. The daughter of Candy Ride has only started once, but that career debut made a big impression.

Bet down to the 9-5 favorite in a Saratoga maiden special weight on July 30, the $190,000 weanling purchase looked every bit the part of the genuine article. She went right to the lead under the Spa's leading rider, Jose Ortiz, and never looked back. In fact, she pulled away from the field of eight midway through, and then continued to widen her advantage from there, ultimately crossing the wire just under a dozen lengths clear of her closest competition.

Trained by Chad Brown, and owned by Klaravich Stables, the attractive, bay filly completed the six furlongs in sharp time of 1:10.92, while in hand. She was given a very solid Beyer Speed Figure of 86 for her first effort. All in all, it was the kind of debut that makes you dream about what might be.

Separationofpowers (Candy Ride-- Shehadmefromhello, by Empire Maker) will have a step up in class on Saturday, as she moves from maidens to Grade 1 company. I like her chances to become a Grade 1 winner in only her second career start, but chances are she will not be a champion. Chances are even slimmer that she will become a future Hall of Famer. After all, fillies like Songbird do not come around every day. Still, it's good to be on the look out for something special, and who knows ... maybe Separationofpowers will be the next big thing.