Will Mubtaahij be the first Kentucky Derby Winner from Dubai? 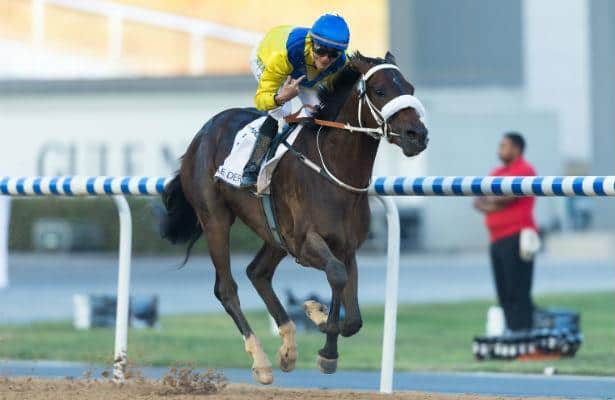 The idea of a horse coming from Dubai to win America’s most prestigious race is somewhat foreign to me -- And now you know why I never made it as a comic. Seriously, though, folks, I am really starting to warm to the idea of 2015 finally being the year that a horse comes out of the UAE Derby to make some real noise on the first Saturday in May. Oh what the heck, I will just come out and say it -- I think Mubtaahij might be just the horse to beat all the Americans and win the 2015 Kentucky Derby.

Boo. Hiss. Before you call me a hater of hot dogs and apple pie -- I’m not. I enjoy eating both of those things -- Let me run down the list behind my reasoning for liking this son of Dubawi so much.

Running Style - With all the speed lining up for this year’s Kentucky Derby, having a horse who can relax early, is, in my mind, a very positive trait. Moreover, the Derby is seldom won by a stone cold closer, but rather by a horse who has enough tactical speed and maneuverability to find a preferable spot in the early stages, and then take full advantage of the right holes at the right times. In watching his racing in Dubai, it would appear Mubtaahij is just such a horse. Just watch him in his latest, as he relaxes early, measuring his competition. He then deftly moves off the rail to pounce, and when asked, his turn of foot is a thing of beauty. All of this should suit him perfectly on May the 2nd.

Training - Mike de Kock is one of the finest trainers in the world, having trained countless good horses to important wins. With the hearty Mubtaahij, he has been able to train his horse to be stronger and fitter than what we typically see in America. His horse is battle tested and only getting better for the work, and de Kock knows how to win big races.

Dirt - For the first time in several years, the UAE Derby was run and won on dirt, and there can be no doubt that Mubtaahij is a dirt horse. Five consecutive strong performances on the surface have more than proven that. While we never knew about the ability of recent Dubai shippers to handle the dirt, it is not a worry this year. There is every reason in the world to believe that Mubtaahij will take to the Churchill Downs’ main track swimmingly.

Distance - Discount this part of the equation, if you will, but after running a trio of solid races at seven furlongs and a mile, Mubtaahij demonstrated his fondness for a route of ground with two excellent performances at 1 3/16 miles. He’s run twice at distances farther than any other horse in the Derby field will have ever run, and in both cases, he finished very strong. When some are getting leg weary late, he should be prepared to see it out all the way to the finish.

Experience - After not doing much on the turf in England as a juvenile, Mubtaahij has had five quality races on Meydan’s new dirt course. Starting with a New Year’s Eve maiden win, the Sheikh Mohammed Bin Khalifa Al Maktoum owned colt has moved up the ladder of quality while racing on a regular basis. No horse will run in this year’s Kentucky Derby with more three-year-old experience than the horse coming from Dubai. Take a look at his lone loss on dirt, and tell me that this is not a tough horse, who will be more than ready for a fight on Derby day.

Form - There can be little doubt that Mubtaahij is thriving. Since coming to Dubai and switching to dirt, he has continued to improve with each and every start. He his 5-4-1-0 in those races, and his latest was undoubtedly his best yet. Provided that he acclimates well to his new surroundings, he will enter the Derby as a red-hot and improving horse. Considering that he has traveled well before, it is a good bet that he will also do well in Louisville.

Class - How do the races like the UAE Derby and Al Bastakiya stack up against American Derby preps? It’s impossible to know for sure at this point, but I would counter that I also wonder quite a bit about how good the horses that the Kentucky Derby favorites (Dortmund, American Pharoah, and Carpe Diem) have been beating truly are, other than Firing Line. In the $2 million UAE Derby, Golden Barows, Maftool, and Sir Fever all came in with a strong reputation, but Mubtaahij simply outclassed them. Who’s to say that bunch could not compete in U.S. stakes racing? And remember how well last year’s UAE Derby winner, Toast of New York did against America’s best in the Breeders’ Cup Classic. Have I convinced you yet? Mubtaahij is a whole new type of Dubai shipper coming for the Run for the Roses. Unlike anything we’ve seen before, he is indeed a major threat to be our next winner of the Kentucky Derby.

... And for more coverage of the Road to the Kentucky Derby, be sure to watch this week’s edition of HorseCenter.