Will First Captain be a second-half star? 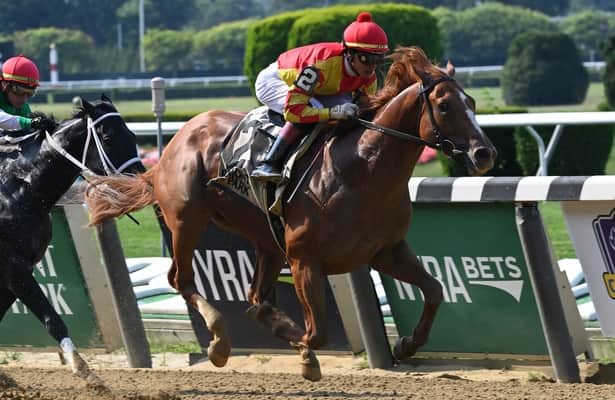 Back in the day, it was Wajima. Then there was Java Gold. More recently, we’ve seen Tiznow and Arrogate do it. There’s something exciting about a 3-year-old colt who takes the division by storm after missing the long and demanding Triple Crown trail.

Could First Captain be such a horse? His next step comes Friday, when he tackles two turns for the first time in Friday’s Curlin Stakes at Saratoga.

By no means will it be a defining race for the colt owned by West Point Thoroughbreds, Siena Farm, Bobby Flay and Woodford Racing, but it likely will be the last step before attempting something really big – something like the $1,250,000 Travers Stakes (G1) on Aug. 28.

A stunning physical specimen, First Captain was bred to be something special. A son of the two-time Horse of the Year Curlin, he resembles his sire as much any of his offspring that I’ve seen so far.

The gorgeous chestnut colt also has the bloodlines on the female side. First Captain is the first foal of America, a daughter of the great A.P. Indy, and she was a graded-stakes winner herself.

Not surprisingly, First Captain was a hot commodity at the Fasig Tipton Select Yearling sale at Saratoga two summers ago. A sale topper, the gavel dropped at $1,500,000.

Sent to Hall of Fame trainer Shug McGaughey, he never made it to the races as a juvenile after an injury while preparing for his debut last summer. When he made his first start in April of this year, he affirmed his connections' steadfast belief that he was a colt of serious potential.

The chestnut got going late to get in a seven-furlong sprint at Belmont Park on Apr. 24, defeating another well-regarded colt in Mahaamel. He returned five weeks later and showed real toughness on a sloppy and sealed track, also at Belmont.

Going a flat mile on May 29, he led in the stretch before being overtaken by Hometown on his outside. It appeared he was in deep trouble down on the rail on the off track, but First Captain came back again to win by a determined length.

He would get his first taste of stakes action when entered in the $250,000 Dwyer Stakes, again at Belmont Park. Facing four other 3-year-old colts, he was made an overwhelming 2-5 favorite in the Grade 3, one-mile affair.

First Captain lived up to the odds, tracking a moderate pace along the rail before swinging out wide for the stretch run under regular rider Jose Ortiz. He powered by his competition to remain perfect in three career starts. Striding out beautifully late, he looked like a horse screaming out for more distance.

While all the big-name colts of the division have been through the grueling Triple Crown trail, First Captain is a fresh new face. He has both the classic look and pedigree of a horse who could do big things. He also is a fresh horse, yet to be pushed. In many ways, his real racing career begins this summer at Saratoga.

Before he goes on to face horses such as the champion Essential Quality in the Travers, he’ll need to prove he can excel around two turns and handle the Saratoga running surface.

First Captain will be heavily favored when the starting gate opens for Friday’s Curlin Stakes, but it is a race where he needs to prove that he deserves a shot at the division’s big boys. I fully expect him to do just that.