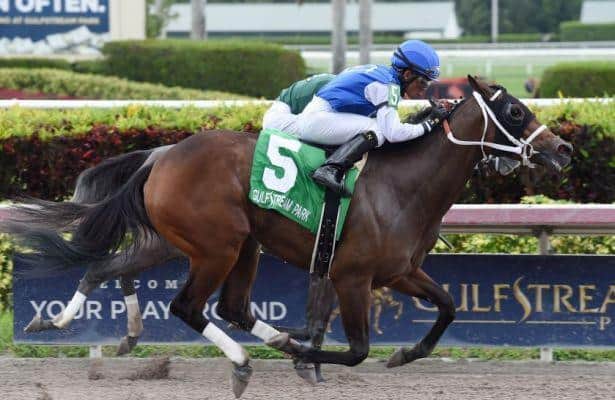 After the House Party Stakes, run four weeks ago at Gulfstream Park, bettors had little doubt that Bode’s Dream could once again handle Wildcat Kate. They were wrong. Turning the tables on her heavily favored rival, Wildcat Kate methodically reeled in the big favorite and edged by for a neck victory in today’s Old Hat Stakes at the South Florida oval.

Inching ever closer to the world’s richest race, Gulfstream Park celebrated the three-week warning to the Pegasus World Cup with a card that included four stakes races. First among them, and the only one before the rains came, was the $100,000 Old Hat Stakes. A powerful winner of her first three races, including a 2 ¾-length victory on a sloppy track in the House Party, Bode’s Dream was pounded down to odds of 1-2. A clear second in the House Party, Wildcat Kate, meanwhile was shown little respect at odds of nearly 13-1 in the six furlong affair for three-year-old fillies.

The race between the two primary principles began at the opening bell. Bode’s Dream broke like a shot from her inside post position, and looked to have the field of six at her front-running mercy. Not so fast my friends, as jockey Eduardo Nunez wanted no part of letting that one away with an easy lead. He asked Wildcat Kate for all her early speed after a slightly flat-footed beginning.

While the favored daughter of Bodemeister carved out the early fractions of :22.63 and :45.69, her plucky rival remained glued to her flank. The rest of the field turned out to be little more than spectators, as the top two continued their battle on the far turn, and into the Gulfstream Park stretch.

While Bode’s Dream proved a determined filly on the inside, she could never put away the one she had beaten on December 10. After taking the race to her from the early stages, Wildcat Kate, trained by Kathleen O’Connell, continued to turn up the heat on the outside down the stretch. She drew ever closer at the eighth pole, on even terms by the sixteenth marker, and from there, she slowly edged on by for a hard fought, and deserving victory. Summer Luck proved best of the rest, but finished an nonthreatening third.

“I know the filly caught a good track today," said Nunez. "Last time she ran with that filly, and she’s a good filly, so I wanted to give her a test. I put my filly next to her and last time it was a sloppy track, but today was a fast track. I know my filly is a good filly, and she showed today that she is. When we started riding I knew I still had something left. It worked out like it was supposed to.”

A daughter of the good young sire, Kantharos, and out of the Wildcat Heir mare, Kombat Kitty, Wildcat Kate runs for San Basilio LLC. The Florida-bred made her debut in maiden claiming $50,000 back in October across town. Luckily for her team, there were no takers, as she rolled home by 15 ¾-lengths. It’s been only stakes racing since, as she finished second, caught late, in the Juvenile Filly Sprint also at Gulfstream Park West in November, before her two split meetings with Bode’s Dream.

Wildcat Kate and Eduardo Nunez turn the tables on Bode's Dream in a thrilling edition of the Old Hat Stakes! pic.twitter.com/0kroGcAg17