Wicked Strong: A connection to the past 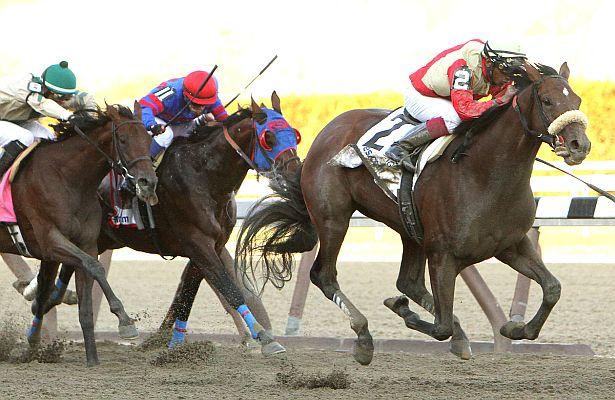 I remember it like it was yesterday. After disappointing in a pair of races in Florida, a well-bred, long-winded colt came north to Aqueduct, and lived up to the potential promised late in his juvenile season with a powerful come from behind victory in the Wood Memorial. It was exactly the kind of performance you want to see heading to the Kentucky Derby. The grade 1 victory not only demonstrated that the colt had turned the corner, and was heading to the first Saturday in May the right way, but it also reminded us of his powerful closing kick which looks all the more imposing considering all the early speed lining up to enter the Derby.

In the case of the Centennial Farms runner, Wicked Strong, it was just yesterday, but of course I’m not only talking about him. Those same words also fit a blast from the past, named Pleasant Colony, perfectly as well. The similarities between the two Wood Memorial winners, separated by a third of century, are obvious. Or at least that is what I thought as I watched Wicked Strong kick home with a vengeance yesterday to win New York’s predominate Kentucky Derby prep.
A quick comparison of the pair’s record through the Wood Memorial points out why I thought of Pleasant Colony before the son of Hard Spun had even hit the wire yesterday.
Each colt failed in their career debut while sprinting at Belmont Park, but bounced back to win smartly while stretching out for their second career race. Pleasant Colony did have the benefit of two more races as a juvenile, but both came to the Remsen Stakes as an unproven commodity. Just like the son of His Majesty had done 33 years earlier, Wicked Strong finished the key race at Aqueduct full of run. Interestingly, both of their late runs fell a ½-length short of a Remsen victory.
While Wicked Strong was the victim of a tedious early pace, Pleasant Colony was actually impeded by the winner and was placed first via disqualification. While the ultimate results ended a little differently, their late runs at nine furlongs were both impressive and offered great promise for the ten furlongs to be seen the following May. Both colts concluded their two-year-old seasons with the Remsen, and were sent south to be freshened and to prepare for the Kentucky Derby trail.
In Florida, the order of the two races were reversed, but very much alike. Both Pleasant Colony and Wicked Strong had one good race, and one disaster. The former ran a good race to finish second in the 1981 Fountain of Youth, but then seemingly never lifted a hoof when beaten by 13 lengths in the Florida Derby. 33 years later, Wicked Strong threw in his head-scratcher first, beaten 15 lengths in the Holy Bull, before coming back with a much better performance. Yes, all things considered, I consider his 4th place finish in the graded stakes quality allowance to have been a promising effort. While both horses ran one decent race out of two in Florida, it was nothing like we would see a little later in the spring in the Wood Memorial.
Both Pleasant Colony and Wicked Strong entered the Wood Memorial with only one career win. Each would face a highly regarded speed horse. Cure the Blues was the big favorite 33 years ago, while yesterday it was Social Inclusion who took much of the pre-race talk. Pleasant Colony was 12-1 for the Wood; Wicked Strong went off at 9-1. After the bruising early fractions set down in 1981, Pleasant Colony was able to swallow up the leaders much earlier, while Wicked Strong needed the final furlong to blow the leaders after a much more sensible early pace was set down in front of him.
Both colts hit the wire in full flight, giving me the sense that if they could not have made it all the way to Louisville on their momentum, at least they could have gone around one more time with the same winning result. Pleasant Colony won it for Buckland Farm by three lengths in 1:49 and change. Wicked Strong won by 3 ½ lengths in 1:49 and change.
Even their trainers are near carbon copies of each other. Pleasant Colony’s man, Johnny Campo was bold and brash. New York through and through, Campo was never afraid to tell you what was on his mind, nor did he ever lack confidence in his ability as a trainer. Jimmy Jerkens … OK, maybe their conditioners really aren’t alike much at all. The son of Allen Jerkens prefers to let his horses do the talking, but you can see why I believe these two colts compare so closely.
As you know, Pleasant Colony was able to build on his Wood Memorial victory with wins in both the Kentucky Derby and Preakness. In the Derby, he was bet down to 7-2 and defeated a field of 21. Wicked Strong will have one less to beat at Churchill Downs, but I’m expecting his odds to be a whole lot closer to 8-1, and I’m excited about that prospect. I do believe history will repeat itself. I finally have my Kentucky Derby horse, and his name is Wicked Strong.
Hard Spun His Majesty Pleasant Colony Social Inclusion Cure the Blues Wicked Strong James A. Jerkens Buckland Farm, Inc. Centennial Farms Aqueduct Racetrack Kentucky Derby Wood Memorial Wood Memorial (2014) Kentucky Derby (2014)