Who Can Possibly Stop Princess of Sylmar? 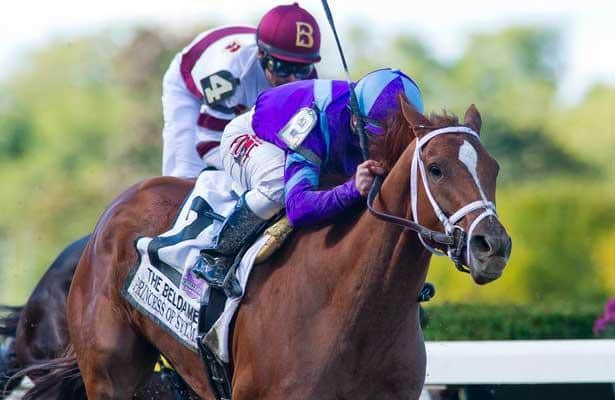 The 77th edition of the Grade 1 Delaware Handicap will be run tomorrow. The mile-and-a-quarter $750,000 filly and mare summer classic has a rich and storied history, and this year’s renewal has attracted one of America’s top horses to the lovely Delaware oval.

In 2013, Princess of Sylmar became the apple of many an eye, and the toast of more than one town. Stars don’t generally emanate from the list of entries of maiden races at Penn National, but this Pennsylvania-bred girl was destined to be something special no matter where she began. The personable, chestnut filly with the white blaze combusted one night with a near 20-length maiden win, and the small track in Grantville, PA suddenly became too provincial to hold her. And so the odyssey began.

As the first horse ever bred by King of Prussia’s Ed Stanco, Princess of Sylmar was bound to occupy a special place in his heart, but even the most optimistic of dreamers could likely imagine where she would take her extended family.

The daughter of Majestic Warrior began the season with a pair of easy stakes wins in front of the half-frozen fans who call Aqueduct their winter home. The Busanda and Busher were most assuredly a step up from Penn National, but still they seemed light years from the promised land of racing’s elite. Still, Team Stanco believed they were connected to something special. When a second place finish in the Grade 2 Gazelle could not squash their enthusiasm, flights to Louisville were booked, and their Princess moved one step closer to stardom.

Winning four consecutive Grade 1 races is more than a dream, it is a once-in-many-lifetimes kinda stuff for anyone lucky enough to own thoroughbred racehorses. The Kentucky Oaks. The Coaching Club American Oaks. The Alabama. The Beldame. Ed Stanco and friends know how lucky they are.

Now four, the Todd Pletcher conditioned miss is ready to forge exciting new avenues to continue her connections on the ride of their collective lives. Thus far, she has made two starts as an older horse, scoring a facile victory in the Cat Cay Stakes at the Big A on April 6, before seeing her rally fall just short to her familiar rival Close Hatches in the Grade 1 Ogden Phipps on Belmont Stakes Day. The loss dropped her career record to a still excellent nine wins and two seconds from 13 starts, while collecting $1.8 million. The defeat was accepted with class and dignity by King of Prussia Stable, but now they are ready to be gracious winners Saturday at Delaware Park.

Only five fillies will line up in opposition of Princess of Sylmar tomorrow, and while Belle Gallantey, Flashy American, Gamay Noir, and Bryan’s Jewel are all capable runners, it is Molly Morgan that looks like the top challenger. It’s possible that she just loves Churchill Downs, but you have to respect what Molly Morgan has done in her last two races. In the Grade 1 La Troienne, the daughter of Ghostzapper finished full of run to get up for second, and then in the Grade 2 Fleur de Lis, she rallied powerfully to blow the doors off a solid bunch of fillies and mares. Molly Morgan’s recent form is excellent. Excellent, but not quite that of Princess of Sylmar.

The Delaware Handicap should be another time to shine for a special filly. Sit back and enjoy the show … Princess of Sylmar will show us all why she is such a big star.