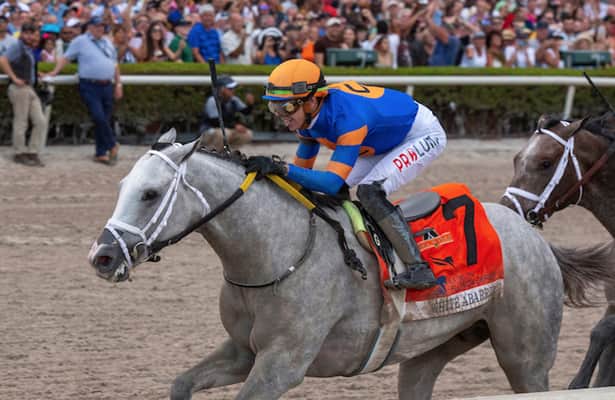 After an extremely tough day at the office in the Kentucky Derby, White Abarrio will look to return to his winning ways when he ventures to Thistledown for Saturday’s $500,000 Ohio Derby (G3).

The signature race at the North Randall, Ohio, oval, first contested in 1876, is not one of America’s high-profile races, but it has produced many horses who have gone to bigger and better things.

Best known of all was the 1996 winner Skip Away. The great champion had more than one thing in common with White Abarrio when he ran in the Ohio Derby 26 years ago.

Both gray runners had used the Florida Derby as a prep for the Run for the Roses, only to find complete disappointment at Churchill Downs. Unlike White Abarrio, Skip Away did not win the Grade 1 race at Gulfstream Park, but he came back a few weeks later to score in the Blue Grass (G2).

A far more experienced colt than White Abarrio at this point in their careers, the son of Skip Trial came out of his tough 12th-place finish in Grindstone’s Kentucky Derby to finish second in both the Preakness and Belmont Stakes. They simply do not make iron horses like Skip Away anymore.

Having won only an allowance race and the Blue Grass in his first seven starts as a 3-year-old, he was a long way from becoming a champion at the end of the year. The Ohio Derby would turn things around for him.

Sent off as the 7-10 favorite in a field of 10, Skip Away demonstrated his authority that afternoon at Thistledown with a 3 1/2-length victory. It was a win that proved a turning point in both his season and his career.

He went on to add his first three Grade 1 victories in the Haskell, Woodbine Million, and Jockey Club Gold Cup in his next four starts, which was enough to secure the Eclipse Award as champion 3-year-old.

Only getting better with age, the Sonny Hine-trained champion went on to be a sensational older horse. He was the champion older male in both 1997 and 1998 and added a Horse of the Year title in the latter for good measure.

Many good horses have won the Ohio Derby since, but Skip Away remains the gold standard for what a confidence-building beginning to the second half of a 3-year-old season can do.

It would be silly to expect similar glory for White Abarrio, but I certainly like the move to take on an easier $500,000 assignment before going after bigger tests in the near future.

Trained by Saffie Joseph Jr., he is already a Grade 1 winner who should be forgiven for his performance on the first Saturday in May. Sure, the 16th-place finish looks ugly on paper, but many top horses (see Skip Away) have succumbed to a tough trip in the crowded Kentucky Derby.

Crowded early and squeezed back, White Abarrio had nothing go right six weeks ago. Hung out wide the entire trip as he attempted to chase a ridiculously fast pace, it should not be held against him that he faded out of the picture down the Churchill Downs’ stretch.

In short, it was not the handsome gray’s day. Now it’s time to reset, and returning against a moderate field in Saturday’s Ohio Derby should be the tonic to get him turned around immediately.

In the two races that preceded the Derby, White Abarrio was an impressive winner over solid fields in the Holy Bull (G3) and the Florida Derby (G1). That Holy Bull victory has since been flattered by the exploits of Belmont Stakes winner Mo Donegal.

White Abarrio, a $40,000 bargain purchase as a 2-year-old for Mark and Clint Cornett’s C2 Racing, has been good from the beginning. The son of Race Day and grandson of both Tapit and Into Mischief won his first two career starts by a combined 10 3/4 lengths.

He will need to prove that he can get it done away from Gulfstream Park, where he has collected all four of his career victories. But the Ohio Derby should be an ideal spot to do just that.

Working well for his first assignment since the Derby debacle, this will be the crossroads race for White Abarrio. Like Skip Away from a quarter century ago, a strong win in the Ohio Derby could send the gray to much bigger and better things.