Zipse: Which Breeders’ Cup race is best choice for Life Is Good? 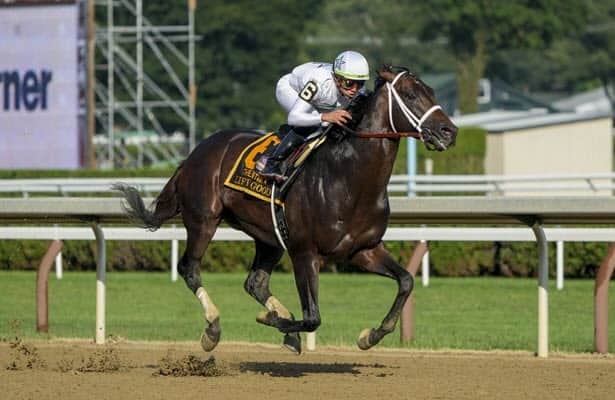 It already has been a very good year for Life Is Good. The 4-year-old son of Into Mischief scored Grade 1 victories in the Pegasus World Cup Invitational and the Whitney Stakes, as well as the John A. Nerud (G2), to cement his place as one of America’s best horses.

With little expected to challenge him in Saturday’s 9-furlong Woodward Stakes (G1) at Belmont at Aqueduct, he likely will bolster his resume heading into the Breeders’ Cup. The question then becomes, in which World Championship race should the Todd Pletcher-trained star be entered?

The obvious choice for Life Is Good would be the $6 million Breeders’ Cup Classic. A victory there at Keeneland undoubtedly would make him the 2022 Horse of the Year, but the decision might not be that simple.

Standing in his way in the Breeders’ Cup Classic would be two large obstacles.

The first comes in the form of Flightline. Undefeated and untested, the son of Tapit looked like something very special in winning his first try at 1 1/4 miles in a Pacific Classic (G1) runaway.

The second stumbling block for Life Is Good, who will look to raise his career record to 9-of-11 with a Woodward win, is the distance. The 10 furlongs of the Classic remains a big question mark for the seven-time graded-stakes winner.

In his only try at the classic distance, the Dubai World Cup is the only blemish in the last six starts for Life Is Good.

On a very different type of track than he will see at Keeneland on Nov. 5, the WinStar Farm and China Horse Club-owned runner looked like a very tired horse in the late stages of the $12 million race. He eventually faded to fourth behind Country Grammer, Hot Rod Charlie and Chuwa Wizard.

It would be easy to discount Life Is Good as a horse who simply does not want 1 1/4 miles after the disappointing result. As good as he’s been in his career, though, perhaps all he needs is another chance, and this time over a track more forgiving to frontrunners.

Surely best at distances shorter than 10 furlongs, it would seem that facing Flightline, not to mention classy and improving 3-year-olds Epicenter and Taiba, would be a daunting task for Life Is Good, but everything about his career to this point says he deserves a shot.

The alternative to the Classic would be the $1 million Breeders’ Cup Dirt Mile. It’s a big race in its own right but falls a far cry short of its 10-furlong big brother in terms of prestige. It also is a race that Life Is Good already owns.

Last year at Del Mar, Life Is Good was untouchable in the Dirt Mile. It was one of many top-notch performances that he has turned in, using his impressive speed to dominate his competition under Irad Ortiz Jr.

It also was excellent racing form, which he has built upon in 2022. His win in the Pegasus World Cup in January at Gulfstream Park might be his best race overall and came at the direct expense of last year’s Breeders’ Cup Classic winner and Horse of the Year, Knicks Go.

Since coming back to the U.S. after his defeat in the Dubai World Cup, it’s been business as usual for Life Is Good. An impressive return win in the seven-furlong John A. Nerud at Belmont Park was followed by an important win in the Whitney.

In that prestigious nine-furlong race at Saratoga, he got a measure of revenge against Hot Rod Charlie, but he also might have shown a bit more stamina vulnerability as he was taken well outside coming off the turn and then sharply to the inside in the stretch by Ortiz to keep his competition at bay.

In the end, there are plenty of good reasons for the connections of Life Is Good to choose the Breeders’ Cup Classic over the Dirt Mile on Nov. 5, but Saturday’s Woodward comes first.

An impressive win over a new surface for him could make the decision easier. But conversely, any struggles with the nine-furlong trip at Aqueduct might make defense of the Breeders’ Cup Dirt Mile the more prudent choice.

As fans of racing, though, none of us are rooting for the latter. We want to see Life Is Good win the Woodward in style on his way to a showdown in the Breeders’ Cup Classic.