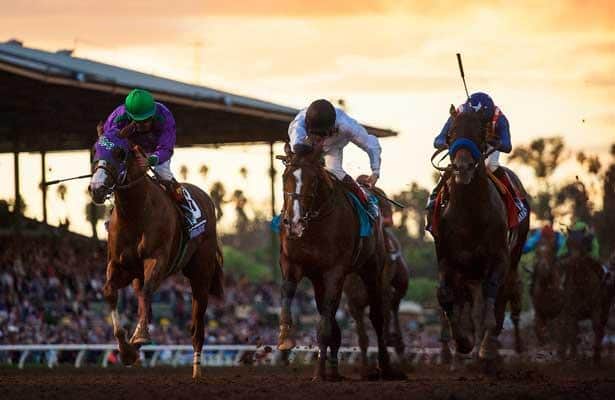 When California Chrome and Shared Belief line up against each other in Saturday’s San Antonio Handicap it will be the rarest of meetings in modern racing. Shared Belief was the Two-year-old Champion of 2013, while California Chrome was the Three-year-old Champion of 2014. The fact that both previous Eclipse Award winners are still in training as older horses is good news for everyone who loves to see top horses compete, but think about this … when is the last time you can remember a juvenile champ, and a 3yo champ locking horns as older horses? I did some research on the subject.

Back in 1990, Sunday Silence and Easy Goer were pointing for a showdown in the summer of their respective 4yo seasons, but neither champion ended up making the race.

As far as my research indicates, and this was not the easiest thing to research, so please feel free to correct me if I missed one, the last time a Two-year-old Champion and a Three-year-old Champion faced each other when they were both older horses was 28 years ago in the Californian.

Tasso was the Two-year-old Champion of 1985, while Snow Chief was the Three-year-old Champion of 1986, and they met on June 7, 1987 at Hollywood Park. Tasso, who never quite lived up to his juvenile season finished 5th, while Snow Chief ran 3rd at 9-5, in his final career race. Interestingly, a Kentucky Derby winner, and soon to be Horse of the Year, Ferdinand, was also in that field and finished 4th.

Surprisingly, I had to go back 14 more years for another occasion. Affirmed met both Seattle Slew and Spectacular Bid, but in all occasions, one of the rivals was still three. Foolish Pleasure, a juvenile champ, met Forego on several occasions, including a pair when both were older, but alas, Forego won all his championships after the age of three. Finally, I came to Riva Ridge and Key to the Mint.

Riva Ridge won the 1971 Championship at two, and narrowly missed out on the honor at three the following year. It was Key to the Mint who earned that title with a strong second half of the season. In 1973, the two champions would meet no less than three times at the age of four. In the Met Mile, Key to the Mint finished 2nd to Tentam, while Riva Ridge finished up the track in the slop. In the Brooklyn, Riva Ridge got his revenge by winning, while his rival finished 4th. Their final meeting came in the very first Marlboro Cup. Key to the Mint showed nothing that day, but Riva Ridge ran his heart out to finish 2nd to Secretariat’s electrifying track record performance. A few months later, Riva Ridge had secured his second championship honor as best handicap horse.

There you have it ... in more than 40 years, Tasso - Snow Chief, and Riva Ridge - Key to the Mint were the only two examples that I could find of a former Juvenile Champion facing a former 3yo Champion as older horses. The last meeting coming nearly three decades ago. Saturday it will happen again. Shared Belief vs. California Chrome. Let’s get this on!