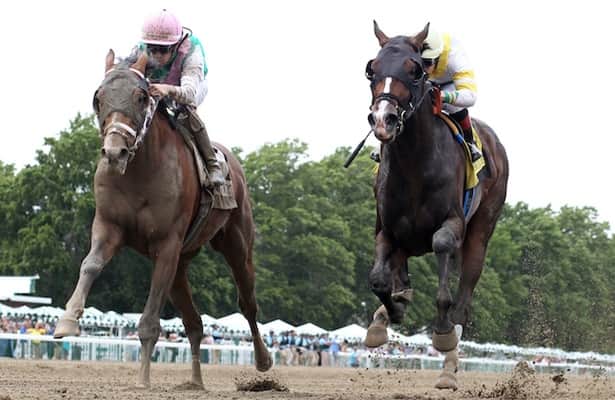 To the victor go the spoils, and to no surprise, all the talk after Sunday’s Pegasus Stakes at Monmouth Park was of the winner, Mandaloun. The horse, who might yet be a Kentucky Derby winner, ran a strong race to overcome a poor beginning and rally for the win in the $150,000 prep for the Haskell (G1). But what about the runner-up?

Sent off at 3-10, nearly everyone expected Mandaloun to win, but the Jimmy Jerkens-trained Weyburn had outrun his odds before, and he almost did it again on the Jersey Shore.

[RELATED: Mandaloun holds on to win the Pegasus]

The original plan for Weyburn was to run in the final leg of the Triple Crown. But the Chiefswood Stables homebred son of Pioneerof the Nile had to scratch out of the Peter Pan (G3) on May 8 after spiking a temperature, and it was decided not to rush him back for the June 5 Belmont Stakes (G1). The Pegasus became plan B.

The 9-2 second choice in the field of five, and making his first start in 10 weeks, Weyburn was a little unsettled in the starting gate and broke just a step behind the speed to his outside. Once he got his big frame going, he quickly took over second while racing a bit wide into the first turn.

Wanting to take over the lead during the entire backstretch, the Canadian-bred was held tightly by new rider Dylan Davis. He was let go and took the lead into the far turn, but the challenges quickly came from initially Dr Jack, the third choice, and then Mandaloun.

Going wide again on the second turn, he forced Mandaloun even wider, but the heavy favorite already had a full head of steam and went right by. The race looked over at that point. At a track that does not allow for jockeys to use their riding crop, Weyburn was far from done.

Re-rallying in mid-stretch, as you rarely see a passed speed horse do, Weyburn fought hard all the way to the wire to make it very interesting in the final 50 yards.

Weyburn is out of the stakes-producing A.P. Indy mare Sunday Affair. His siblings include multiple graded-stakes winner Yorkton and multiple stakes-placed Nipigon. A big, good-looking and athletic horse, he demonstrated talent early but needed time to mature.

Improving with each start at 2, he broke his maiden in his third career start, going 7 furlongs at Aqueduct on Dec. 5. A couple of minor setbacks, including a foot bruise, would not allow for an early start to the Triple Crown trail.

Instead, Weyburn came back three months later in the Gotham (G3), over the same track as his maiden score. The layoff did not bother him one bit, and he ran a huge race as a sizable long shot.

In upsetting the Gotham at odds of 46-1, Weyburn defeated a pair of highly regarded horses from the Chad Brown barn in Crowded Trade and Highly Motivated. He also displayed tactical speed and a relentless fight to get to the finish line first.

It was soon decided that the Belmont, and not the Kentucky Derby, would be the first major goal for the physically developing dark bay. On the road to the Belmont, Weyburn came back in the Wood Memorial and stubbornly gave way down the stretch on a tiring track in a race dominated by late runners.

Once again on Sunday we saw what kind of determination Weyburn brings to the table. Despite the time lost and minor setbacks, this son of Pioneerof the Nile is proving to be one of the most tenacious runners of the 3-year-old crop.

Now only six races into his career, he has become one of my favorite horses in training. The brave Gotham win was his first victory in graded stakes racing. After what I saw yesterday, I am confident in saying it will not be his last.