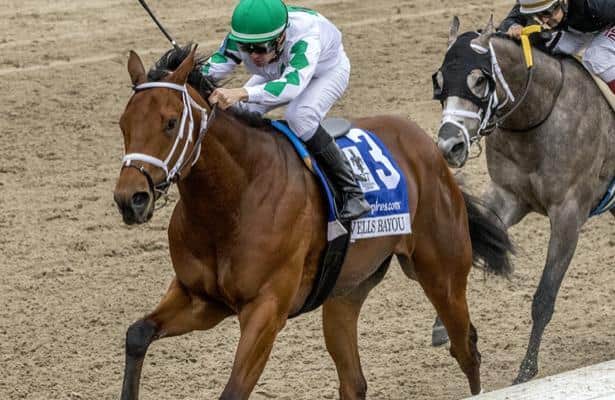 Unfortunately, several of the top 3-year-olds of 2020 will not be back in 2021. Big names already retired to stud include the undefeated Nadal, the talented Honor A.P., and of course, the soon to be champion Authentic. Still, the new crop of older horses looks to be well represented with such standouts as Charlatan, Tiz the Law, and Maxfield.

While those are the names that will carry the headlines into a new year, I wanted to touch on some soon-to-be 4-year-olds who could be on the verge of big things in 2021. Three such horses who currently fly a bit under the radar as the calendar turns are Wells Bayou, Idol and Forza Di Oro.

Long after an injury knocked Wells Bayou off the Kentucky Derby trail, the good-looking son of Lookin At Lucky has returned to the work tab with a string of solid works for trainer Brad Cox. After several at Churchill Downs, his most recent work came at Oaklawn Park, where he looks to be very close to making his return to the races.

When he does return, it will be his first race since a disappointing fifth-place finish in the Grade 1 Arkansas Derby behind Nadal. I believe he is far better than that result would suggest. Bone bruising was found soon after the result, and little has been said about Wells Bayou since.

Look for that to change soon as this was a colt who was developing very nicely early in his sophomore season. A sharp allowance victory to start the season was followed by a solid runner-up performance in his stakes debut. That second in the Southwest soon was followed by a handy score against 13 others in the $1 million Louisiana Derby.

It’s a little odd to classify a horse who won a million-dollar race as “flying under the radar,” but I think that is where we are with this forgotten colt. With the speed to take it to his competition early, I expect a more mature Wells Bayou to be a very difficult horse to tangle with in 2021.

Meanwhile, after three strong races at Churchill Downs to begin his career, Idol made his stakes debut on Saturday in the San Antonio (G2) at Santa Anita. While the jump in class did not produce a victory, the handsome son of Curlin definitely showed that he belongs in graded stakes company with a very solid second-place finish.

Down on the inside the entire trip, the well-bred bay battled gamely to squeeze through on the rail and pass the early leaders, but he could not hold off the momentum of the long shot winner, Kiss Today Goodbye, who was rallying strongly on the outside. It was the kind of performance that showed me this one has class to go along with his talent.

Trained by Richard Baltas, Idol might not yet be a stakes winner, but it should only be a matter of time. He has come around quickly since finishing second in his career debut in September, has good tactical speed and clearly is right at home going a distance. Look for him to be a force to reckon with in 2021.

Another who may not be on the radar of many is Forza Di Oro. The son of Speightstown is a homebred of Don Alberto Stable and trained by the Hall of Famer Bill Mott. The chestnut colt missed much of 2020 after exiting the 2019 Remsen with a physical problem.

Unable to make it back to the races until Oct. 9, he made up for lost time with a strong allowance victory going 8 1/2 furlongs in his 3-year-old debut. The game win in fast time set him up perfectly for a re-emergence in stakes racing and he would not disappoint.

Facing a solid field in the Discovery Stakes (G3) at Aqueduct, which included experienced stakes performers Monday Morning QB, Shared Sense and Attachment Rate, Forza Di Oro stayed in touch early before getting the green light to go turning for home. From there, he powered home an authoritative winner.

Undefeated at two starts at 3, Forza Di Oro is now wintering in South Florida and already has had two workouts at Payson Park in preparation for his first start as an older horse.

They may not have the buzz of stars like Charlatan, Maxfield and Tiz the Law, but Wells Bayou, Idol and Forza Di Oro are three to watch out for in 2021.