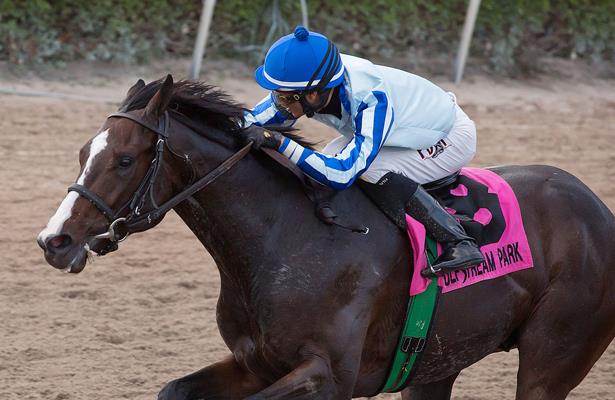 Before you decide on which Baffert you will be backing in the 2015 Kentucky Derby, there’s a horse I think you should give a second, or maybe a third look. A good looking son of Flatter, Upstart, has been nothing but solid thus far in his seven-race career. But sometimes good horses get shuffled back in the collective conscious. Such was the case a dozen years ago when a New York-bred gelding went off as the seventh choice in the 2003 Derby. As we all know, Funny Cide put it all together at the right time, and outran his odds that afternoon at Churchill Downs. Besides the fact that Upstart is also a poster boy for the New York State breeding program, he reminds me quite a bit of the horse he will try to emulate.

Both Funny Cide and Upstart were purchased out of the Saratoga August sale as yearlings, and trace back to classic American bloodlines of Seattle Slew, Mr. Prospector, and Northern Dancer. Each started their career in the summer of their two-year-old seasons by winning NY-bred maiden sprints in impressive fashion.

Funny Cide debuted at Belmont Park as the favorite, and had little trouble in proving too good for his competition for veteran trainer Barclay Tagg. Tagg, at the time, was a 64-year-old respected trainer with many stakes winners, but the former steeplechase rider was still a relative unknown on the Triple Crown stage.

12 years later, Upstart began his career a few weeks earlier, and had some traffic to overcome as the race favorite at Saratoga, but like Funny Cide, he turned plenty of heads as a sharp first-out winner. Since the beginning, Upstart has been trained by 62-year-old Rick Violette. Like Tagg before Funny Cide, Violette is a well respected horseman, but the former exercise rider, with a background with hunters and jumpers, has yet to break through on the biggest stage.

From there, each New York-bred and based juvenile went on to distinguish themselves in their first season, despite going on decidedly different paths. Each would make their second career start in a statebred stakes race, and each came home a winner. Funny Cide romped in the Bertram F. Bongard, while Upstart rallied by a very fast two-year-old named Bustin It, in the Funny Cide Stakes.

After that it was one more stakes race for statebreds for Funny Cide, and this time he had to work for the win, before finally getting to the wire ahead of Spite The Devil. He finished his juvenile season a perfect 3-for-3.

Upstart would not go undefeated at two, but unlike Funny Cide, he was tested against much tougher competition, finishing second in the Grade 1 Champagne, before venturing out to California to run 3rd-of-11 in the Breeders’ Cup Juvenile. He was only a nose behind Carpe Diem for second that day in Santa Anita, and proved himself one of the top two-year-olds in the nation.

Both Funny Cide, in 2003, and Upstart, this year, wintered in South Florida and began their sophomore seasons in the Holy Bull Stakes at Gulfstream Park. Upstart came out running, and dusted the highly regarded Frosted by 5 ½-lengths in the $400,000 early Derby prep. Funny Cide, on the other hand, had a rough go, before weakening to fifth in his seasonal debut.

Both Funny Cide and Upstart would get in two more races between the Holy Bull and the first Saturday in May. Neither New York-bred star would officially win in those final two preps, but both would gain experience and prove a level of toughness in those races.

Funny Cide set a solid early pace in the Louisiana Derby before being passed by the highly regarded Peace Rules. The Sackatoga Stable runner finished third that day, but he fought back nicely in the stretch after looking like he could easily be well beaten early in the lane. Upstart also showed his courage in his second start of the year, when he turned away the challenge of Itsaknockout to win the Fountain of Youth by nearly three lengths. Coincidentally, both of them were involved in a disqualification in their respective second prep race of the year.

Both New York-breds followed up their adjudged seconds by actually finishing second in their final Kentucky Derby preps. Funny Cide ran a game second to the soon to be Derby favorite, Empire Maker in New York’s Wood Memorial, while Upstart fought on in the Florida Derby, despite being impeded a bit by the race winner, Materiality. Both the Wood Memorial of 2003, and the Florida Derby of 2015 were rated highly by the speed figure guys.

So there you have it. Funny Cide and Upstart have more than just a few things in common at this point in their careers. They both have tactical speed, solid experience, and possess plenty of toughness. What’s it all mean? Perhaps history will repeat itself and Upstart will pull a Funny Cide.

Meet Brian Zipse
Brian has been a passionate fan of horse racing his entire life. Taken to the races at a very young age, he has been lucky enough to see all the greats in person from Secretariat, Forego, and Ruffian through Rachel Alexandra, Zenyatta, American Pharoah and Justify. Before coming to the Nation, Brian displayed his love for the sport through the development of his horse racing website, which quickly became one of the most popular blogs in the game. His new racing partnership venture, Derby Day Racing, invites more fans to experience the thrill of racehorse ownership.
The Editor of Horse Racing Nation from 2010-2017, Brian authored a daily column as Zipse at the Track, created the popular racing show, HorseCenter and added his editorial flare to the overall content of the website. Now a Senior Writer for HRN, Brian continues to contribute his thoughts on racing, as well as hosting HorseCenter. A big supporter of thoroughbred aftercare, he serves as the President of The Exceller Fund.
Brian's work has also been published on several leading industry sites. He has consulted for leading contest site Derby Wars, is both a Hall of Fame and NTRA poll voter, and is a Vox Populi committee member.
A horse owner and graduate of DePaul University, Brian lives just outside of Louisville with his wife Candice and daughter Kendra.
ZATT's Star of the Week
Finite