It's Uncontested all alone in the sloppy Smarty Jones 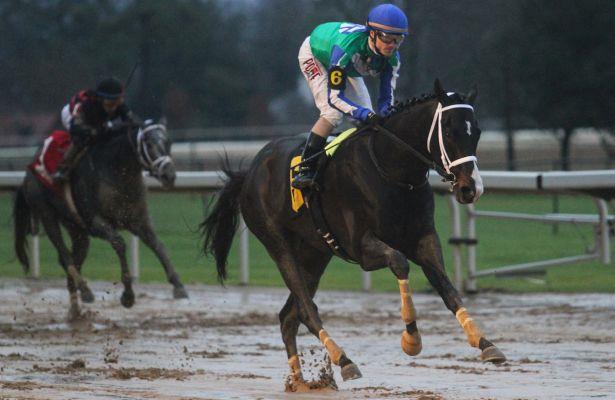 Announcing himself as a serious talent, and a horse to be reckoned with on the 2017 Kentucky Derby trail, Uncontested went right to the early lead, and never looked back on his way to a dominating 5 ¼-length romp in the Smarty Jones, over a sloppy and sealed track.

On a rainy day at Oaklawn Park, the lightly raced son of Tiz Wonderful was sent off at odds of 6-5 in the field of eight, while making his first start as a three-year-old. Trained by Wayne Catalano, and ridden once again by Channing Hill, the dark bay colt went straight to the lead from his outside post position, and cleared the field heading into the first turn.

Always looking comfortable on the lead, Uncontested carved out solid fractions of :23.04 and :46.21. The race’s second choice Petrov, moved up on the rail to take over second early on the backstretch, and the two soon left the rest of the field behind. While Petrov opened a working advantage on the rest, he had trouble keeping up with the out and winging leader. Uncontested hit the three-quarter mark in 1:10.70, and began to assert himself. Meanwhile, Petrov felt the rider’s whip a few times, but to no avail.

Uncontested took off at the top to the lane and quickly left no doubt about today’s winner. Petrov stayed on well to be a clear second, as Rowdy the Warrior rallied past Warrior’s Club into third. Up front, it was all Uncontested. He drifted out a bit late, under wraps, to hit the wire an easy kind of winner.

“I almost feel bad getting after him,” Hill said. “He’s a horse that fools you. At the top of the lane he was traveling really nice and he was handling the track well. He’s such a cool, classy little guy. He doesn’t lollygag, but he can get a little lazy on you. He was still moving forward, but I just gave him a few taps as a reminder about what we were doing today and he absolutely cruised from there.”

The final time for the flat mile over the sloppy conditions at the Hot Springs oval was a sharp 1:36.32. With the Smarty Jones victory, Uncontested raised his lifetime record to 3-2-0-0. A big winner of his career debut at Keeneland back on October 19, he moved right into graded stakes racing when tiring to finish fourth of twelve in the Grade 2 Kentucky Jockey Club Stakes at Churchill Downs over Thanksgiving weekend.

Owned by Harry Rosenblum and Robert LaPenta, today’s win raised his lifetime earnings to $135,300. As a Kentucky Derby points race, Uncontested added ten points to his total. His new total of 11 is currently good for fourth place overall among American runners, behind only Classic Empire, Gormley, and Practical Joke.

The winning trainer talked about the track conditions after the race, with one eye on the Derby. “It worked out how we wanted it to,” Catalano said. “The goal was break and go. You think you want to be on the front end, but when you do that there’s always a cavalry charge. You just have to let it play out. You never want an off-track, but he handled it before OK. I was kind of OK with it. You hate to have an off track for everyone. But, sometimes it rains on the first Saturday in May, so you better be ready.”