Could unbeaten 4-year-old and Mystic Guide clash at Belmont? 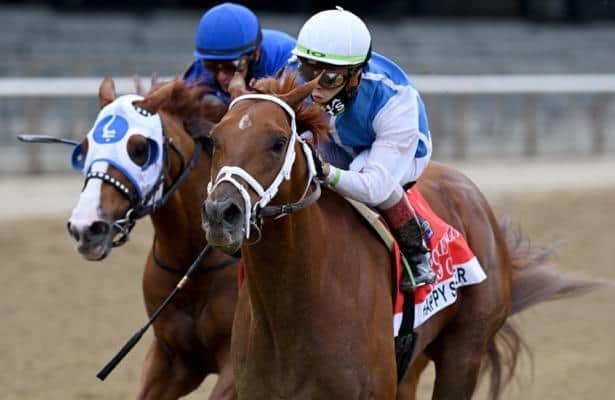 With all that already has happened in racing so far in 2021, it’s easy to forget about a horse such as Happy Saver. Out of the limelight for the first half of the season, the undefeated son of Super Saver now looks primed to make some noise.

Wanting a fresh horse for the summer and fall, and with the Breeders' Cup Classic (G1) the ultimate goal, his connections have kept him lying in wait for an assault on the second half of 2021. A bullet workout of 5 furlongs in :59.40 on Friday at Belmont Park, coming three weeks after his victorious return to the races, signals that they are getting more serious with the Grade 1 winner.

Under the watchful eye of the newly minted Hall of Fame trainer Todd Pletcher, the Wertheimer et Frere homebred is scheduled to make the $400,000 Suburban (G2) on July 3 his return to graded stakes action. A win-and-you're-in event for the Breeders' Cup Classic, the 10-furlong race looks to be a reunion of sorts.

A start in the historic holiday test is likely to feature a rematch from Belmont Park nine months earlier. It was in the 10-furlong Jockey Club Gold Cup (G1) where Happy Saver and Mystic Guide announced themselves as legitimate Grade 1 runners, and now they both appear to be Suburban bound.

The tenacious Happy Saver got the best of Mystic Guide on that afternoon, but his rival has since made a name for himself with two wins this year, including the rich Dubai World Cup (G1) in March.

Meanwhile, Happy Saver returned from a long layoff on May 28 in a classy allowance race at Belmont. The one-turn mile proved to be less than eye-popping, but it was typical for the chestnut colt, who raised his record to a perfect 5-for-5. Pulling away late, he scored by a measured length in a final time of 1:36.57 in his first start in 7 1/2 months.

Not one to annihilate his competition, it was a solid return to the races for a horse who Pletcher admits was not fully cranked up. The more mature, but still lightly raced version of Happy Saver should be ready to show us more a week from Saturday, and he’ll likely need it if indeed the expected Jockey Club Gold Cup rematch materializes.

Getting a late start to the season is nothing new for Happy Saver. Unraced at 2, he did not make his career debut until winning a seven-furlong maiden race on June 20 at Belmont Park last year. He was a sharp winner that day. Bred to handle a distance, he demonstrated the ability to run fast with a final time of 1:21.51.

Stretched out to 9 furlongs for his second career start, he displayed a finishing kick that he has become known for. Content to stay in touch for a long time in the allowance race at Saratoga, he took control and motored away from his competition in the final furlong for another easy victory.

His stakes debut came out of town in the Federico Tesio Stakes at Laurel Park. There, he had to deal with a talented and stubborn runner loose on an easy lead, but it was only a matter of time before he reeled in Monday Morning QB for his third straight victory.

Less than four months after his debut, Happy Saver then moved on to the prestigious Jockey Club Gold Cup for his victory over Mystic Guide. It was a quick rise to prominence, and rather than push for more, his connections chose to wait for a big 4-year-old year.

It has been a long time coming, but it now looks like their patience could be handsomely rewarded. Mystic Guide undoubtedly will represent a major test in the Suburban, but this should be only the beginning for Happy Saver as he works his way towards a date in November’s Breeders’ Cup Classic.