12 times a stakes winner, Firenze Fire is all racehorse 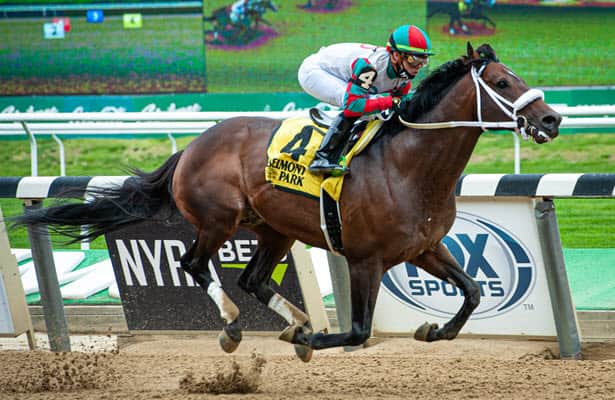 Somewhat lost in the uproar surrounding the positive drug test of the Kentucky Derby winner was yet another stakes win for Firenze Fire.

Perhaps the Runhappy (G3) at Belmont Park will never be on a short list of races of the year or even one of the most important races of last weekend, but the winner is a horse who deserves attention.

The 3 1/4-length victory in the Runhappy was vintage Firenze Fire – he stalked, he pounced, and he ran fast.

The easy stakes victory in his seasonal debut marked the fifth consecutive year that the bay Mr. Amore Stable homebred has become a stakes winner – a feat that is becoming more and more rare in modern racing.

One of the more interesting things about Firenze Fire is the barn switch he went through. The 6-year-old son of Poseidon's Warrior was one of about 20 Mr. Amore Stable runners transferred to the stable of Kelly Breen two winters ago.

Breen has a quite clean racing record, as opposed to Firenze Fire’s former conditioner, the indicted trainer Jason Servis. The switch hasn’t bothered the 12-time stakes winner a bit. All he does is run hard every single time.

It all began for the Florida-bred back in June 2017, when he made his debut at Monmouth Park in a 5-furlong maiden special weight. Sent off as the 5-1 fourth choice in a field of seven and ridden by Antonio Gallardo, Firenze Fire stalked the early lead and went right on by at the head of the stretch on his way to an easy victory.

That debut victory marked his only start that was not in a stakes race. The next 31 and counting all have been stakes races. In fact, he became a graded stakes winner in his second career start when he went to Saratoga and won the Sanford (G3) as the second-longest shot on the board.

That summer afternoon at the Spa, he was ridden by Irad Ortiz Jr. The top rider was happily aboard him again on Saturday in the Runhappy.

Two races after his Sanford win, Firenze Fire became a Grade 1 winner when he doggedly got by that year’s juvenile champion Good Magic in Belmont’s Champagne Stakes. Belmont Park always has been good to him, having won 6-of-9 there lifetime.

Despite all his wins – he is 13-of-32 overall, with better than $2.3 million in the bank – his finest performance might have been in a defeat at Belmont Park when he threw down with Imperial Hint in a most memorable edition of the Vosburgh (G1). Firenze Fire lost this 2019 edition by a nostril.

As honest as they come, Firenze Fire was good enough on the 2018 Kentucky Derby trail to make it into the starting gate for the Run for the Roses, but his 11th-place finish offered proof that he is better at shorter distances.

Showing no ill effects from his tough loss in the Derby, he came back in his next start to win the Dwyer Stakes (G3) by 9 lengths in a final time of 1:33.74. Knowing his game, the Dwyer was the first of 22 straight races at a mile or less.

Perhaps Firenze Fire would have fared better in the Breeders’ Cup if they held the event at Belmont Park, but the other venues haven’t stopped him from trying.

He’s run in the World Championships in each of his first four seasons – another sign of a very good horse. The first year it was the Juvenile, followed by the Dirt Mile, and the last two years it has been the Sprint.

He hasn’t broken through yet, but last year was his best result yet, finishing third and close to grabbing second.

It’s not likely he will ever be a champion, but then again, I probably would have said the same thing about Whitmore less than a year ago. Perhaps the very best from this racing warrior is still in front of him.

What I do know about Firenze Fire is that he is all racehorse. Year after year, he keeps coming back at a high level and continues to win graded stakes races. Saturday’s impressive victory in the Runhappy makes it five consecutive years and counting. What more can you ask of a racehorse?